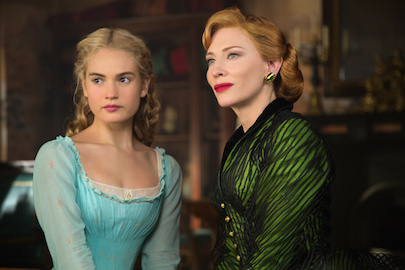 Opening March 13, the AWFJ Movie of the Week is Cinderella, a live-action retelling of the classic fairy tale from actor/director Kenneth Brangh, who follows up previous films Jack Ryan:Shadow Recruit and Thor with something altogether more gentle. Read on…

British actress Lily James (subject of AWFJ’s March SPOTLIGHT) Jumps from her TV success in Downton Abbey) to the big screen, taking the eponymous role of the downtrodden young girl who – with the help of a magical fairy godmother – ends up winning the heart of the aptly named Prince Charming (Game of Thrones star Richard Madden). Also joining this impressive cast are the incomparable Cate Blanchett, who revels in her portrayal of Cinders’ villainous step-mother Lady Tremaine, Helena Bonham Carter as the Fairy Godmother, Stellan Skarsgaard as the Grand Duke and Derek Jacobi as The King.

This impressive rosta of performers brings to life a screenplay written by Chris Weitz (About a Boy, The Golden Compass), who stays true to the iconic story’s family-friendly themes – this is Disney, after all – while allowing the stellar cast the room to add depth and personality to these well-worn characters. Ultimately, however, this is a straight-up adaptation of a childhood classic and its timeless mix of traditional magic and romance should continue to enthrall.

Anne Brodie: Cinderella is pure magic for me and many my age.  We grew up on Disney’s animated film and those images come to life, with an added contemporary edge in one glorious package. The visuals, the story, the characters add up to magic.

MaryAnn Johanson: My pick is Cinderella, because I’m curious to see what Disney has found to say that’s new in this old story.