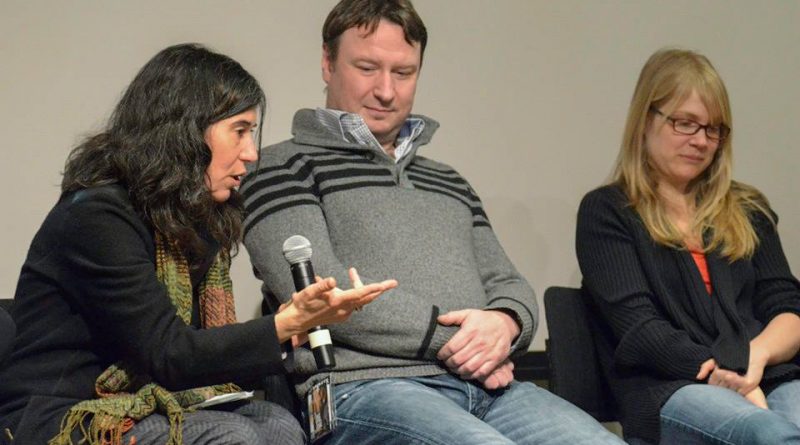 As audience members, each of us has a visceral response to images on the screen. We walk away with our own opinions and feelings when the lights come up once again. Whether a particular documentary touches you or not, having the opportunity to interact with the filmmakers in person is sometimes a once in a lifetime experience. During this year’s Salem Film Festival, AWFJ hosted two very successful and extraordinarily insightful panel discussions. Jennifer Merin moderated each of the panels, asking questions of the artists that they may never have posed to themselves. With time allotted for audience participation, attendees were allowed a glimpse into the making of some of the films featured at this year’s festival.

The first panel discussion, and the subject of this commentary, was titled FILMMAKER FORUM: The Alliance of Women Film Journalists Present “Storytelling Skill Sets for Documentarians”, and took place on Saturday, March 7, in an auditorium at Salem’s superb Peabody Essex Museum.

Documentary filmmaking requires special storytelling savvy and boundless creative ingenuity. The filmmaker must untangle a massive web of facts and events and then use the bits and pieces and strands to knit a comprehensible, compelling and well structured yarn. To do this effectively, documentarians must utilize all their skills, especially those honed while working on previous projects — even non doc enterprises ranging from fiction features to commercials.

The variety of panelists with unique perspectives was immensely educational. Their past experiences came in handy when approaching their work as documentary story tellers.

Jannie Langbroek spoke about how documentary filmmaking is breaking away from journalistic storytelling and effectively employing nonlinear structures and other storytelling styles that give films greater artistic values and stronger impact on audiences. She pointed out that American-made documentaries tend to be more journalistic in style than those made in Europe and Latin America, perhaps because of the influence of television in the U.S.

Mark Schuman spoke about how years of working in all craft capacities on other peoples’ films prepared him for making his own first feature documentary. He also spoke about how his work in the music business ultimately gave him access to the subjects of his film.

Marie-Lou Gingras explained how she used her graphic design background when she was editing down a massive amount of original content into the narrative storyline, and in choosing successions of images with specific compositions that would impact the audience. She explained that she uses graphic elements in the film to suggest ideas as opposed to explicitly making statements or accusing.

One of the particularly interesting moments was when Steve London, who has a strong background in music composition, spoke about the impact of music and sound in film, saying that its direct emotional effect on audiences is often greater than the images presented to them on screen. London’s comments began a hail storm of answers from other panel members about the use of sound in film in general. They reflected on how moments of silence effect an audience, and discussed what is a filmmaker’s responsibility in using sound to evoke emotion.

CAN WE BE MANIPULATED BY A COMPOSER OR EDITOR?

Debra Granik expounded upon the difference between real or natural sound and that which is added afterwards for effect. She said she’s obsessed with getting natural sound that sets mood and ambiance, revealing the positive and negative spaces in the narrative of someone’s life. She spoke about how to capture the feeling of the things a subject hears everyday in their world. She believes filmmakers have a responsibility to use them in truth and try not to use them to control the audience’s emotional journey.

QUESTIONS FROM THE AUDIENCE

The audience members were encouraged to ask questions.

One attendee asked how each of the panelists started in the industry. Many went to school, others learned as they worked their way up the production ladder, and all admitted to networking as if it were their primary and most essential. Everyone agreed that documentary filmmaking is something you do out of passion. Like anything in the arts, the primary motivation is not for financial gain.

Another attendee inquired how to break into the industry without any experience. The filmmakers had helpful suggestions– such as watching all the movies you can to determine your likes and dislikes, hiring a local cameraman to see if your idea ‘flows’ on screen, and finding a collaborator who can be a support system for you. Everyone, Jennifer Merin included, suggested trying to “beg, borrow, and steal” your way through your project. Simply asking for help and approaching those who are willing to volunteer their skills, services, locations, etc. is the best advice. And, never take “No” for an answer.