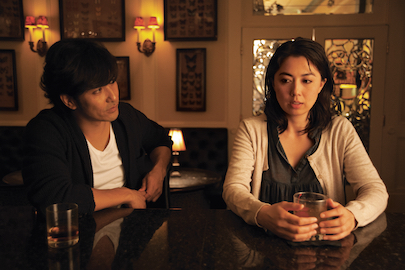 Opening March 27, the AWFJ Movie of the Week is Man from Reno, the new thriller from filmmaker Dave Boyle (Daylight Savings, Surrogate Valentine). It reunites him with his White on Rice star Pepe Serna, who takes the role of Sheriff Paul Del Moral who, while driving home through fog in a small town south of San Francisco, accidentally hits a Japanese man. Before any investigation can take place, however, the man disappears from hospital without a trace. At the same time, Japanese mystery author Aki Akahori (Akayo Fujitani, Boyle’s Daylight Savings) begins a romantic affair with a Japanese traveller from Reno (Kazuki Kitamura) while visiting San Francisco. Read on…

With three stunning performances at its heart, Man From Reno showcases director Boyle’s (who also co-wrote with Joel Clark and Michael Lerman ) long-standing understanding of and appreciation for Japanese culture, and weaves it into a beguiling mystery narrative that nods to both Hitchcock and the Coen Brothers. With some evocative cinematography from Richard Wong (Snow Flower and the Secret Fan), it’s as visually stunning as it is narratively engaging.

Pam Grady: There are shades of Hitchcock and hints of Coen Brothers. in Man from Reno, indie auteur Dave Boyle’s intricate, San Francisco-set mystery about a small-town sheriff and a Japanese mystery novelist’s dangerous search for a missing man. The director’s cultural observations and attention to character and terrific performances from leads Pepe Serna and Ayako Fujitani enhance this suspenseful crime drama.

Jennifer Merin: This femme-centric thriller tells the tale of a best-selling Japanese mystery novelist (Ayako Fujitani) who abandons her stressful U.S. book tour and heads for San Francisco, where she steps into a twisted mystery that takes over her life. The daringly slow-paced and understated narrative is so full of surprises and interesting idiosyncrasies that it keeps you thoroughly engaged, while giving you time to meditate on the strange ironies of a woman’s success, love and loneliness. Review.

A Wolf at the Door