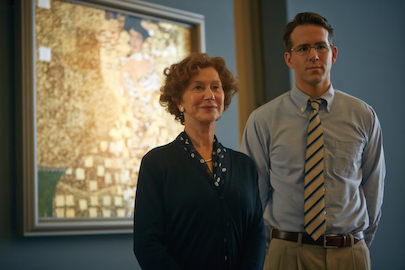 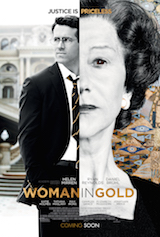 Opening April 1, the AWFJ Movie of the Week is Woman in Gold, British director Simon Curtis’ follow-up to his 2011 feature My Week With Marilyn. Here, he takes on the true story of Maria Altmann, an octogenarian Jewish refugee living in the USA who went head to head with the Austrian government to recover artwork that had been stolen from her family by the Nazis. She was helped in her quest to reclaim the painting- the famous portrait of her aunt Adele Bloch-Bauer by Gustav Klimt – from Austria’s Belvedere Gallery by fresh-faced attorney Randol Schoenberg. Read on…

It’s a fascinating story, adapted by playwright turned debut screenwriter Alexi Kaye Campbell, but the real draw here lies with the prodigious talents of Dame Helen Mirren, who takes the role of Altmann, Mirren is one of the most shining examples of that all too rare thing, an actress who is absolutely unmissable in any role she chooses to play. Her vivacity and strength make her the perfect choice to play Altmann, a woman determined not to let an injustice slide, despite her advancing age and the huge political and cultural roadblocks she faced along the way.

Tatiana Maslany (Orphan Black) gives an equally spirited performance as the young Maria in flashback scenes, in which her relationship with her impossibly glamorous aunt Adele (Antje Traue) is explored. And while Reynolds is as dependable as ever as Maria’s right hand man, it’s Mirren who, as ever, steals the show.

Nell Minow: My pick is Woman in Gold for the real life story of a woman who would not allow a decades long injustice continue.

Jennifer Merin: Based on a true story, the film focuses on how Maria Altmann (Helen Mirren) reclaimed her family’s legacy by fighting to possession of Gustav Klimt paintings, including a portrait of her beautiful aunt Adele Bloch-Bauer, that were stolen by the Nazis during World War II. Helen Mirren is magnificent at the persistent and persuasive woman who refused to give up on justice. A must see.

To Write Love on Her Arms

The Salt of the Earth