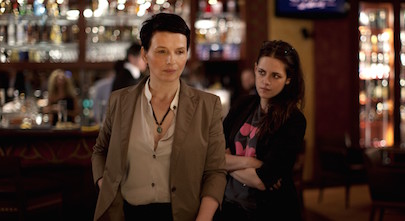 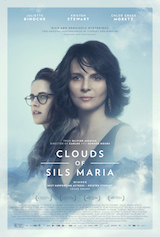 Opening April 10, the AWFJ Movie of the Week is Clouds of Sils Maria, the new drama from French writer-director Olivier Assayas (Summer Hours, Paris je t’aime). Taking the lead is the incomparable Juliette Binoche, who stars as successful veteran actress Maria Enders. At the height of her fame, Maria is asked to take part in a revival of the movie that shot her to stardom; not in her original role as ingenue, however, but as the story’s duped matron. Read on…

Locked away in rehearsals with her troubled young co-star Jo-Ann Ellis (Chloe Grace-Moretz), whose new superhero film has made her an overnight sensation, and her sharp tongued assistant Val (Kristen Stewart, in her Cesar-winning performance), Maria is forced to confront her past fame and her increasingly uncertain future in an industry she is struggling to keep up with.

There is a great deal to enjoy here, from Assayas’ intelligent, insightful script, which muses on the changing nature of fame and theatrical artistry, to the whip smart dialogue, particularly between Maria and Val. And indeed, the greatest pleasure comes from watching this trio of exceptional actors breath life into a film that does absolute justice both to their talents, and to the multi-faceted characters they play. Unmissable.

Pam Grady: Ostensibly the story of an actress facing uncomfortable truths about aging head-on when she agrees to play a role in a revival of the play that made her famous, Clouds of Sils Maria is more intriguing in its exploration of the relationship between Juliette Binoche’s star and the personal assistant (a dazzling Kristen Stewart in her Cesar Award-winning performance) she expects to fill her every needs–including the lonely void at the center of her life.

Liz Whittemore: My pick is Clouds of Sils Maria. Having seen this at NYFF this past year, I feel it will be an extraordinary film for a rather wide audience. Opening on the heels of Kristen Stewart’s Cesar win and with the ever talented Juliette Binoche, this is a film about the relationships we cultivate with other women. With impeccable, almost tongue in cheek casting choices, the mirror of life is held up to Stewart and Binoche in both their careers and personal lives. Set against the lushness of its locations, Clouds of Sils Maria is artful and truthful in the same breath.

Jennifer Merin: French director Olivier Assayas certainly has is way with female characters, and the three who are central to the story in Clouds of Sils Maria are exquisite examples of his understanding, compassion and observational skills. Performed with great honesty and panache, the aging actress (Juliette Binoche), her assistant (Kristen Stewart) and the ingenue (Chloe Grace Moretz) are our guides to a compelling meditation on women’s vulnerabilities, interpersonal relationships and interdependencies, need for recognition and self-expression and so much more. The cinematic values, too, are exquisite in the extreme.

Living in the Age of Airplanes

The Sisterhood of Night