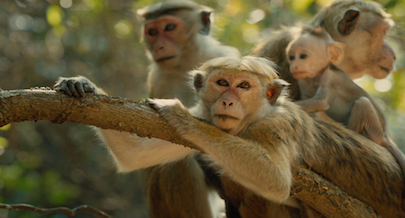 Opening April 17, the AWFJ Movie of the Week is Monkey Kingdom, the new documentary from Disney’s nature arm. Its focus is a female monkey who lives in the ancient ruins of the Sri Lankan jungle and who, along with her newborn baby, must navigate life in her Temple Troop. As the troop’s fight for survival forces them from their natural home into increasingly urban areas, the new mother must also cope with the social hierarchies and codes of conduct that dictate her fate – and that of her baby. Read on…

Monkeys have long been a source of fascination to nature filmmakers and directors Mark Lindfield and Alastair Fothergill clearly have an affinity for their subject, their focus on the primates’ recognizably human traits effectively celebrating an intelligence and resourcefulness that deserves both our admiration and respect. Tina Fey’s spirited, witty narration highlights the monkeys’ endearing personalities, and the sumptuous cinematography by Martyn Colbeck and Gavin Thurston is both stunning to look at and drives home the message that we should all be fighting to save our natural world and the remarkable creatures who reside within.

Anne Brodie: Monkey Kingdom is the wonderful kind of “good for you” film that we don’t see often enough. It takes us to Sri Lanka where we watch  mighty, social snobs live our their fascinating monkey lives. Tina Fey’s lighthearted delivery sets the film apart from the documentaries you watched in school.  It’s good for the soul and yes, I learned some things!

Jennifer Merin: Monkey Kingdom is a mind-expanding observation of family life among monkeys whose struggle for survival takes them from the jungles of Sri Lanka into an urban environment. The DisneyNature documentary’s focus on a mother and her baby provides compelling eyewitness evidence that humans are not Earth’s only sentient creatures, and that the others deserve our respect. The extraordinary cinematography is as captivating as the film’s very engaging characters.