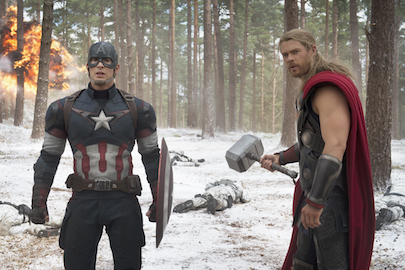 Opening May 1, the AWFJ Movie of the Week is Avengers: Age of Ultron, the latest installment in the box office beating superhero franchise from writer-director Joss Whedon. This time around, Tony Stark’s (Robert Downey Jr.) attempts to reactivate an old peace keeping programm go terribly awry, and the Avengers must re-team to defeat the villainous Ultron (voiced by James Spader) in his nefarious plan to take over the world. Read on…

The main strength of the Avengers lies in its casting, and the gang’s all here; joining Downey Jr. are Chris Evans as Captain America, Mark Ruffalo as The Hulk, Chris Hemsworth as Thor, Jeremy Renner as Hawkeye, Samuel L Jackson as Nick Fury and Scarlett Johansson. There’s also a few new fades joining the fray, including Aaron Taylor Johnson as Quicksilver and Elizabeth Olsen as Scarlet Witch (both characters made their debut in Captain America: Winter Soldier). This impressive line-up, which includes some exceptional women being given equal chance to flex their action muscles, along with some outstanding visuals and Whedon’s accomplished direction make this an early summer blockbuster must-see.

MaryAnn Johanson: My pick is Avengers: Age of Ultron. Apart from the general awesomeness of the franchise, it has been pretty good in giving smart, meaty roles to women, and I’m hoping this one will continue that trend.

Anne Brodie: Avengers: Age of Ultron! This is the superhero action film to watch. An electrifying cast under the guidance of Joss Whedon and a cool storyline are irresistible even for a less-than-enthusiastic superhero fan like me. Bring it on baby.

Far from the Madding Crowd