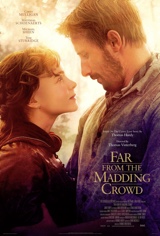 The novel it’s based on is a century and a half old, but this new cinematic adaptation of Thomas Hardy’s Far from the Madding Crowd is more modern, more progressive, and even just plain more grownup that half the movies thrown at us in our stodgy convention-bound movie landscape. And it’s not always modern in positive ways! The challenges faced by its female protagonist as she navigates a man’s professional realm and the assholery she encounters as she navigates a woman’s romantic options are barely distinguishable from what women are still putting up with today. Read more>>