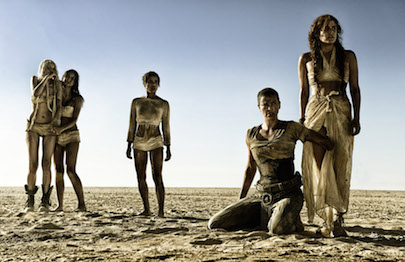 Opening May 15, the AWFJ Movie of the Week is Mad Max: Fury Road, director George Miller’s high octane reboot of his 1979 post apocalyptic action classic. Tom Hardy (Locke, Child 44) steps into the lead role that originally made a star of Mel Gibson, his Max Rockatansky becoming a figurehead for revolution in a world where humanity has completely broken down. As gangs roam the arid desert landscape, fighting to the death for basic supplies, Max and fellow traveller Furiosa (Charlize Theron) pose an unlikely challenge to the blood-thirsty, sociopathic status quo. Read on…

The film’s trailer showcases some incredible action, with most of the effects being physical rather than computer generated, and while the film promises to be a bombastic start to the summer season its cast is also a huge draw. The teaming of the hugely talented Hardy and Theron – taking a strong, prominent role – hints at the fact this will be a blockbuster with brains, and who better to update this narrative for a modern audience than original director Miller (who this time co-writes with Brendan McCarthy and Nick Lathouris). With the film being a reboot rather than a straight remake, it looks set to introduce a whole new generation to Max while satisfying the legion of original fans.

Pam Grady: Director George Miller attempts to reinvigorate his own franchise with Mad Max: Fury Road. With Tom Hardy taking over the titular character from Mel Gibson and partnering with Oscar-winner Charlize Theron, this looks to be an apocalyptic action thriller with brains as well as brawn.

MaryAnn Johanson: My pick is Mad Max: Fury Road, which looks like it might have a somewhat feminist bent (or else that aspect of the film is something that is going to drive me bonkers). Read review.

I’ll See You in My Dreams

In the Name of My Daughter