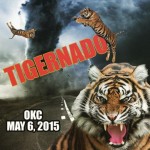 On Wednesday night, the Tiger Safari roadside zoo in Tuttle (which is west of Oklahoma City) was hit by one of the many small- to medium-size tornadoes wandering around the landscape, and there were concerns that wild animals had escaped. It turned out that no tigers were harmed or released in the making of that tornado, but by the time that was confirmed, we had already turned tigernado into a topic trending worldwide on Twitter. Tigernado is a reference to the inexplicably popular Syfy telefilm Sharknado, and memes based on that ridiculous monster movie and its sequel soon were flying around Twitter like so much twister debris. The poster for Life of Pi also became a popular tigernado meme, especially as flood waters rose and turned streets into rivers if not oceans, and jokes about Oklahoma rolling a 5 or 8 on the Jumanji dice ran as rampant as hyped-up storm chasers. Meanwhile, all I’m thinking is that we really need to make the 2010 documentary The Elephant in the Living Room required viewing in a state this disaster prone.Read more>>