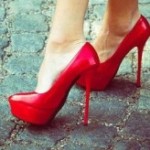 While the Cannes Film Festival created a controversy over its rule that women must wear high heels to walk the red carpet to some of the festival’s screenings, back in Hollywood, it became clear that some industry honchos are real low down heels of the sexist and ageist variety. And actresses are getting very vocal in their protests. Read more>>