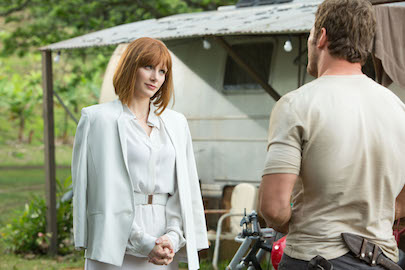 Opening June 12, the AWFJ Movie of the Week is Jurassic World, one of the most hotly anticipated movies of the year. An astonishing 22 years after the original film wowed us with its cutting edge special effects – which still hold up today – and 14 after Jurassic Park III, we return to the dinosaur theme park Isla Nebular to find it fully operational and pulling in visitors. Technology, it seems, has evolved to such an extent that safety is guaranteed; but, when a new attraction malfunctions, things go very bad, very quickly. Read on…

Stepping into the lead is man-of-the-moment Chris Pratt, fresh from his Guardians of the Galaxy success, and he is joined by the substantial talent of Bryce Dallas Howard, Vincent D’Onofrio and Omar Sy. With Colin Treverrow (the outstanding Safety Not Guaranteed) in the director’s chair, and a special effects team taking full advantage of all technology has to offer, Jurassic World promises to be the visual event of the year.

Anne Brodie: Jurassic World is the way to go – the nostalgia factor, new CGI and a nature defying gamble. Chris Pratt is charm on wheels and I’m rooting for Bryce Dallas Howard who has been away too long.

MaryAnn Johanson: My pick is Jurassic World—even though it doesn’t look like it will have particularly good representation of women—because, dinosaurs! Read review.

June 12
Jurassic World
Madame Bovary
Set Fire to the Stars
Me and Earl and the Dying Girl
The Wolfpack
Live From New York!
The Yes Men Are Revolting
Vendetta
The Stranger