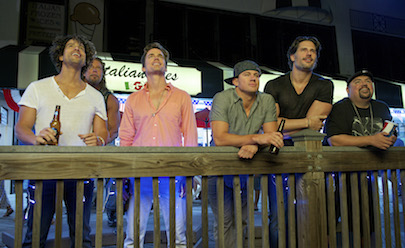 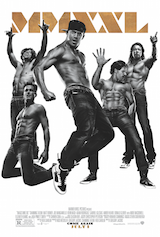 Opening July 1, the AWFJ Movie of the Week is Magic Mike, the follow-up to Steven Soderbergh’s surprise 2012 hit about a troupe of male strippers taking the world by storm. That film’s assistant director Gregory Jacobs (Wind Chill) takes over where Soderbergh left off, while original star Channing Tatum returns as the eponymous Magic Mike. Three years after he left the stripping lifestyle behind, Mike is persuaded to join the remaining Kings of Tampa – sadly, sans Matthew McConaughey’s scene-stealing Dallas – for one last blow-out performance in Myrtle Beach.

While Magic Mike XXL’s initial attractions may be obvious – a good-looking, nearly-naked cast and Tatum’s legendary dance moves – returning writer Reid Carolin’s narrative actually digs way beneath all that baby oil. Amidst the glistening flesh is a story about genuine male friendship – something rarely explored in any real detail by Hollywood – reinvention and, ultimately, redemption; all with a kick-ass soundtrack and killer abs. It’s eye candy for the soul.

Pam Grady: Channing Tatum’s dance moves alone ought to be worth the price of admission to Magic Mike XXL, a palate cleanser in the midst of the summer’s bloated action blockbusters.

Sheila Roberts: My pick is Magic Mike XXL. Gregory Jacobs delivers a high energy, genuinely moving tale about friendship, leaving the past behind, and finding the courage to reinvent yourself.