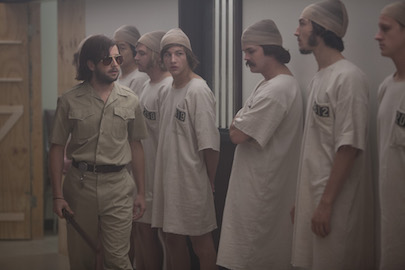 Opening July 17, the AWFJ Movie of the Week is The Stanford Prison Experiment, the dramatisation of events which occurred at Stanford University in 1971. Professor Philip Zimbardo (played by Billy Crudup, Almost Famous) cast 24 of his students in the roles of prisoners and guards in a mocked up prison in the university’s basement; an experiment to examine human behaviour under such circumstances. Despite the students’ initial camaraderie, it doesn’t take long for them for friendships to break down and extreme behaviours to emerge. Read on…

Using real transcripts and with the involvement of Professor Zimbardo himself, Tim Talbott’s (TV’s South Park) script is an exercise in intense, pressure cooker drama, expertly handled by director Kyle Patrick Alvarez (C.O.G). Unlike in previous dramatisations of this remarkable story – the German Das Experiment and its American remake – Alvarez knows his material is astonishing enough, without the need for any dramatic gimmicks or overt narrative signposting. That is equally true of his excellent ensemble cast, populated by the likes of Crudup, Ezra Miller (We Need to Talk About Kevin), James Wolk (TV’s Man Men), Nelson Ellis (True Blood) and Tye Sheridan (Mud), who handle the story’s descent into anarchy without ever resorting to histrionics. Chilling, impactful and utterly unforgettable, The Stanford Prison Experiment is an unmissable reminder that truth is always stranger – and more fascinating – than fiction.

Nell Minow: My choice is The Stanford Prison Experiment — An outstanding cast and a compelling true story that outdoes Lord of the Flies in exploring how quickly humans can lose their humanity.

Pam Grady: A who’s-who of young American actors take the spotlight in The Stanford Prison Experiment, a tense, revealing dramatization of the infamous 1970s era psychological experiment in which college students took on the roles of prisoners and guards with shattering results.

Jennifer Merin:The Stanford Prison Experiment is an utterly gripping, chilling narrative about a psychological test situation that goes terribly wrong, but rightly reveals the inherent stresses that lead to the acting out of injustice when one group of people has control over another group of people. Powerful, unforgettable drama.