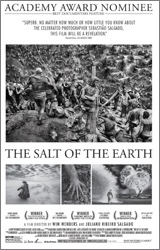 I think the first time I became aware of the work of Sebastião Salgado was when his stark black-and-white photographs of the hellish landscape of the burning oil fields in Kuwait in 1991 were all over magazines at the time. You may also have seen his harrowing yet powerfully humanistic images of people impacted by war, famine, displacement, and other 20th-century nightmares: he has documented such now infamous places-and-times as early-80s Ethiopia and Bosnia and Congo in the 1990s. Of his work in Bosnia, Salgado says here, sadly: “Everyone should see these images to see how terrible our species is.” And that’s why this film is so essential, too. Read more>>