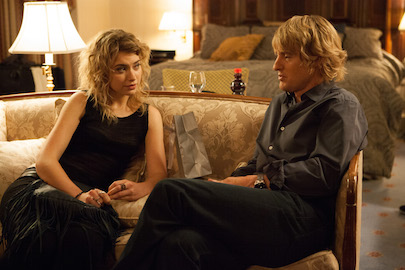 Opening August 14, the AWFJ Movie of the Week is She’s Funny That Way, the new film from actor/writer/director Peter Bogdanovich (The Last Picture Show). Described as a screwball comedy in the same vein as Bogdanovich’s 1972 classic What’s Up Doc?, it follows the interconnected lives of the cast and crew of a Broadway show. Read on…

Jennifer Aniston and Will Forte also make an appearance, as a therapist and her love interest respectively, while What’s Up Doc? star Austin Pendleton can be found amongst the supporting cast.

With an eclectic career spanning almost five decades, Bogdanovich is one of cinema’s most enduring stalwarts and any new film is an anticipated event. That this is his first big-screen feature in over a decade, following 2004’s star-studded comedy The Cat’s Meow, only adds to the sense of expectation.

AWFJ Movie of the Week Panelists Comments:
Pam Grady: Forty-two years after making his first homage to screwball comedy, What’s Up Doc? , Peter Bogdanovich returns with She’s Funny That Way , a romantic farce set behind the scenes in a theater and starring Owen Wilson, Imogen Poots, Kathryn Hahn, Rhys Ifans, Jennifer Aniston, and Will Forte. What’s Up Doc? costar Austin Pendleton is among the supporting players in a film that dangles the promise of capturing some of that old Bogdanovich magic.

August 10
And We Wait

August 13
A Curry On An American Plate
Fun Time