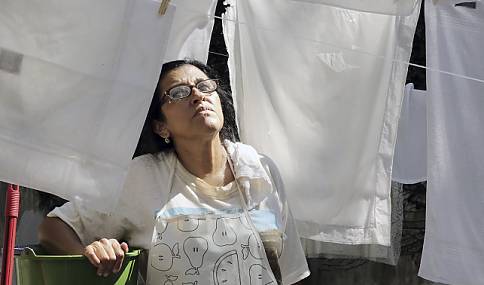 Opening July 1, the AWFJ Movie of the Week is The Second Mother, Brazilian writer/director Anna Muylaert’s tale of a household thrown into upheaval by the sudden arrival of the live-in housekeeper’s estranged daughter Read on…

The brilliant Regina Case is housekeeper Val, who is also happy playing ‘second mother’ to her wealthy employer’s teenage son. When her own adolescent daughter Edna (Helena Albergaria) arrives, however, the household dynamics are thrown into upheaval and the divide between rich and poor becomes increasingly pronounced…

Film-maker Muylaert has won multiple awards and nominations for her previous works like Durval Records (2004) and Smoke Gets In Your Eyes (2009), and The Second Mother was nominated for the Grand Jury Prize at this year’s Sundance and won both the C.I.C.A.E. Award and the Panorama Audience Award in Berlin. It’s easy to see why it’s been picking up so many accolades; Muylaert’s expert, nuanced exploration of inter-familial relationships, particularly those between women, is a joy to behold, played beautifully by the exceptional cast.

Jennifer Merin: Brazilian filmmaker Anna Muylaert’s The Second Mother is a beautifully crafted drama about the interaction between wealthy urban Latin American families and their maids, most of whom come from impoverished rural environments. Val (brilliantly played by Regina Case) is content in her role as ‘second mother’ to a wealthy Rio de Janiero family’s now teenage son, until her own teenage daughter, who’d been raised by relatives in the countryside, comes to town to live with her mother while she attends university. The household’s patron-employee dynamics are suddenly thrown into turmoil, reflecting women’s perspectives – those of writer-director Anna Muylaert, as well as those of the film’s well-conceived, scripted and realized female characters – on current class conflict, as it impacts women, in a most compelling and compassionate way. This film is a must see.

Other Movies Opening the Week of August 24-30:

August 27
The Looking Glass
The Sunset Six
I Before Thee