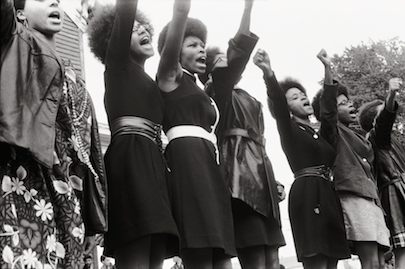 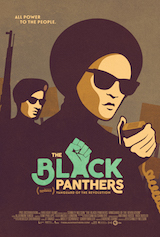 Opening September 2, the AWFJ Movie of the Week is The Black Panthers: Vanguard of the Revolution, Stanley Nelson’s fascinating documentary looking at the rise and fall of civil rights movement The Black Panthers.

Multiple-award winning documentarian Nelson (Wounded Knee, Freedom Riders) delves into the history of the Panthers movement, using archival material and fascinating talking head interviews to tell the story of the group who rose out of America’s ghettos to demand racial equality, and the controversy surrounding their methodologies. With issues of race still being firmly in the spotlight, thanks to films like Ava DuVernay’s stunning Selma and social movements like #BackLivesMatter, Nelson’s compelling, incisive film is a timely reminder of the genesis of the revolution.

It’s a also a stark commentary on a culture that both motivated and repressed such a revolution, and an eye-opening study how the upper echelons of society – J Edgar Hoover’s ruthless FBI – fought to crush it at every turn. The most shocking aspect of Nelson’s film is, however, how painfully relevant its message still is.

Pam Grady: Two generations before the rise of #BlackLivesMatter, the Black Panthers were the new face of the civil rights movement, dedicated to revolution while serving the Black community with a variety of programs and caught in the cross-hairs of hostile law enforcement. The group and the era come alive again in award-winning filmmaker Stanley Nelson’s fascinating documentary The Black Panthers: The Vanguard of the Revolution.

Jennifer Merin: Drawing on compelling archival material, documentary filmmaker Stanley Nelson cuts through the mythology and dogma — bad and good — associated with the Black Panthers to reveal the true nature and focus of the controversial group that rose from ghetto obscurity to international prominence and influence, making the world aware of severe racial injustice in the United States, and demanding change. The film is essential viewing for all who are concerned about political evolution and the ongoing struggle for equal rights.

September 2
A Walk in the Woods
Ciudad Delirio
She Wins

September 6
The Family Business
The Curse of Jengo