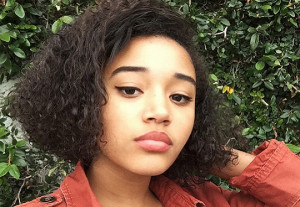 Our latest SPOTLIGHT subject may be the youngest yet, but in her 16 years actress Amandla Stenberg has proven that she deserves to stand alongside such previously AWFJ-highlighted champions for diversity as Cynthia López and Geena Davis, if only based on her potential. It’s been a short three years since Stenberg burst into the scene with a supporting role in the first Hunger Games movie, but in that time she’s already become a leading force in conversations surrounding cultural appropriation and the need for intersectional feminism. 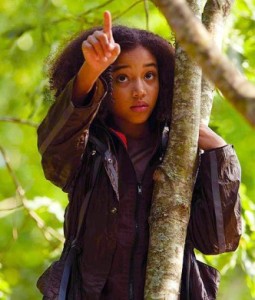 At age thirteen, Stenberg found herself at the middle of a bizarre controversy—the Internet’s favorite kind—when a small yet vociferous corner of Twitter objected to her casting in The Hunger Games. They didn’t have issues with her ability as an actress—she’d only had two roles before then, in a Hallmark Channel TV movie and as the young version of Zoe Saldana’s character in Olivier Megaton’s Colombiana—but rather her race. Stenberg, an African American actress, had been cast as the 12-year-old Hunger GamesThe Hunger Games family. It was an amazing experience; I am proud of the film and my performance. I want to thank all of my fans and the entire Hunger Games community for their support and loyalty.”

After proving to be one of the highlights of The Hunger Games, Stenberg moved to TV, appearing in Fox’s fantasy drama Sleepy Hollow as the daughter of local lawman Frank Irving (Orlando Jones). 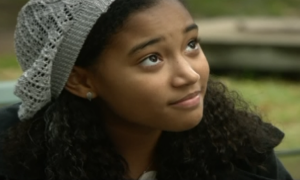 She also plays Halle Foster, one of the students of Craig Robinson’s title character in NBC sitcom Mr. Robinson, which completed its six-episode order in August of this year.

In addition, Stenberg’s filled up her time with charity work—supporting Share Our Strength and the Ubuntu Education Fund—and the small matter of school. She’s just starting out her senior year in high school, after all. College prep looms.

The Voice of the Future

With acting currently taking a back seat to education—she says wants to direct eventually and might go to film school, citing director Ava DuVernay as one of her influences—Stenberg doesn’t have a ton of acting roles lined up. But she’s still in the news for her outspoken criticism of cultural appropriation, arguing in an April video titled “Don’t Cash Crop On My Cornrows” that “The line between cultural appropriation and cultural exchange is always going to be blurred. But here’s the thing: Appropriation occurs when a style leads to racist generalizations or stereotypes where it originated, but is deemed as high fashion, cool, or funny when the privileged take it for themselves. Appropriation occurs when the appropriator is not aware of the deep significance of the culture that they are partaking in… What would America be like if we loved black people as much as we loved black culture?” 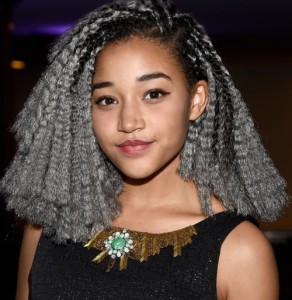 More recently, Stenberg took the bold move of moving into Kardashian airspace, calling out Kylie Jenner for appropriating black culture by donning cornrows. By doing so, Stenberg noted, Jenner—who, for context, had been promoting a new wig line—was “appropriat[ing] black features and culture but fail[ing] to use [your] position of power to help black Americans by directing attention towards [your] wigs instead of police brutality or racism.”

Following the backlash, Stenberg tweeted “End the ‘angry black girl’ narrative. It’s just another attempt to undermine perspectives. I have strong opinions. I am not angry.” She continued on Instagram, where she wrote about the double-standard between black and Eurocentric beauty standards: “While white women are praised for altering their bodies, plumping their lips and tanning their skin, black women are shamed although the same features exist on them naturally… [Black female bodies] are symbols of pain, trauma, and degradation. Often when they are sexualized it is from a place of racial fetishism… When the media is not ignoring black women altogether, they are disparaging them.”

Before anyone rolls their eyes at any AWFJ Spotlight post featuring the words “Twitter,” “Instagram” and “Kardashian,” it should be noted that much of the discourse surrounding issues of diversity, racism, and feminism today take place on social media, and those discussions are reaching a wider number of people—most specifically and importantly, young people, who will after all inherit the world just a few short years from now—than ever before. That young women like Stenberg are stepping up and having thoughtful, meaningful conversations about issues like cultural appropriation, and doing so in a way that fosters discussion and awareness among both their contemporaries and older generations, is a hopeful sign for the future and, we believe, more than enough to earn her a spot in AWFJ’s Spotlight roster.