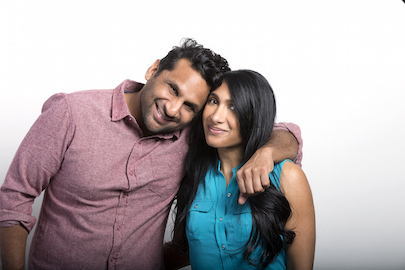 Opening September 2, the AWFJ Movie of the Week is Meet The Patels, the new documentary from filmmaker Geeta Patel (Project Kashmir) which tells the story of her family’s involvement in her 29-year-old Ravi brother’s romantic relationships. Read on…

Combining the tropes of romantic comedy with a sharp documentary eye, Geeta documents the family’s journey back to India and her parents’ attempts to help find their son a wife. Geeta and Ravi have a modern, American outlook and their parents are holding on to the Indian way of life, the result is an endearing, compelling fly on the wall look on cross-generational relationships and the enduring importance of cultural traditions.

The universality of the film’s message is helped by Geeta’s use of her brother, mainly in animated form, as both guide and something of a narrator of his journey. Ravi is as unfamiliar with the customs of his parents as a viewer may be and his POV, together with Geena’s intimate shooting style, make this a colourful and personal look at a fascinating family.

Nell Minow: Meet the Patels is an adorable documentary romantic comedy about one particular culture and one particular family that is endearingly universal. Read Nell Minow’s interview with filmmakers Geeta and Ravi Patel.

Jennifer Merin: Filmmaker Geeta Patel’s charmingly clever documentary about her family’s ‘intervention’ in her 29 year old brother’s marital status is filled with wit and with revelations about how cultural traditions influence interpersonal relationships between generations.

Other Movies Opening the Week of September 7-September 13:

September 10
I Had A Bloody Good Time At House Harker

September 12
The Murder Pact
5To7 Minutes