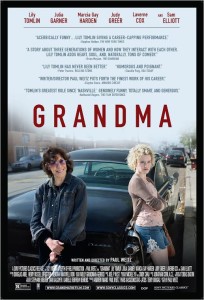 As we head into the final months of 2015, the theaters are beginning to fill with films that are destined for awards season consideration. This year, we look forward to a sampling of some mighty powerful female driven movies, each of which features an A-list cast and an exceptionally strong performance by the leading actress(es). Include the yet to be released (in September and October) About Ray, Suffragette and Freeheld among them. However, the true standout is writer/director Paul Weitz’s superb new film, Grandma, starring Lily Tomlin — who is always brilliant and has never been better — as Elle Reid, a matriarch who suddenly finds herself with a mission. Read on…

Elle Reid (Lily Tomlin) has just gotten through breaking up with her girlfriend when her granddaughter Sage (Julia Garner) unexpectedly shows up needing 600 dollars before sundown for an abortion for an unplanned pregnancy. Temporarily broke, Grandma Elle and Sage spend the day trying to get their hands on the cash as their unannounced visits to old friends and flames and Moms (Marcia Gay Harden) end up rattling skeletons and digging up secrets. 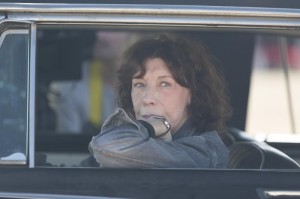 Grandma is about women and their relationships with both sexes. It can at times be a stormy course to navigate – the emotional dealings between mothers and daughters and grandmothers and granddaughters. Serving as both writer and director, Paul Weitz superbly captures the voice of women in everyday life, while honestly portraying what, and HOW, we express our thoughts and feelings to each other.

Weitz also fairly portrays both sides of the abortion issue. The film doesn’t make light of the issue. It puts it in the context of the characters and their lives. Each has her own perspective towards the issue. Weitz has said, “I am not trying to make a statement in the film. In my personal life, I am a feminist, and I would have said that even before Emma Watson’s lovely speech to the UN. The film is largely about moving on from loss through wit and empathy and the ability to say ‘screw you.’” Bravo!

Composer Joel P. West’s score is one of this year’s best and adds heart to this lovely film.

No matter which side of the abortion issue you come down on, this is a must-see movie with a wonderfully soulful, Oscar-worthy performance by Lily Tomlin.

GRANDMA is playing in cinemas across the U.S. now. Watch the trailer.