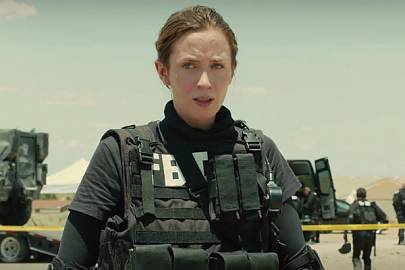 Opening September 2, the AWFJ Movie of the Week is Sicario, which stars the exceptional Emily Blunt (Edge of Tomorrow, Into the Woods) as an idealistic FBI agent who finds herself in the middle of the escalating war on drugs taking place on the border between the United States and Mexico.. Read on…

She stars alongside Benicio del Toro, who gives what critics are describing as one of the finest performances of his career as a government advisor with his own personal agenda, as well as Josh Brolin, Victor Garber and Jon Bernthal.

French-Canadian director Denis Villeneuve has proven he can deliver tense, thought-provoking drama with the likes of Incendies, Prisoner and last year’s brilliant Enemy; achievements which, along with Sciaro, have seen him given the awesome responsibility of helming the upcoming Blade Runner sequel. Here, he is working with a tight, intelligent debut screenplay from actor turned writer Taylor Sheridan, which packs a political punch as well as some incredible action; the latter lensed to perfection by veteran cinematographer Roger Deakins.

The real draw, however, is watching Emily Blunt excel in another demanding role, further cementing her place as one of the leading ladies of modern cinema.

Pam Grady: Benicio Del Toro is absolutely chilling as he gives one of the finest performances of his career as a government “adviser” with an agenda in Sicario, a tense, violent thriller set along the American/Mexican border and amidst a literal war on drugs.

Leba Hertz: The always talented Benicio del Toro outdoes himself, giving possibly the best performance of his career in Sicario

Other Movies Opening the Week of September 14-20:

September 14
The Hive
The Swaggapuss Story