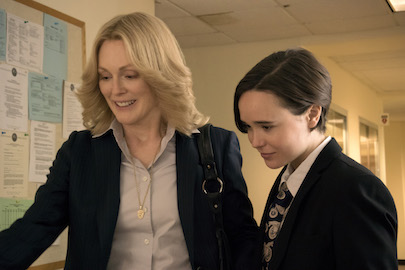 Opening October 2, the AWFJ Movie of the Week is Freeheld, starring Julianne Moore as a terminally ill police officer fighting to ensure that her pension goes to her same-sex partner (Ellen Page). Read on…

Written by Ron Nyswaner, who previously penned heavyweight dramas such as Philadelphia and The Painted Veil, the screenplay confronts institutional homophobia head on via the story of decorated cop Laurel Hester (Moore) who discovers she is terminally ill… and that, on her death, her pension will not be given to her long-time same-sex partner Stacie Andree (Ellen Page). Determined to right this wrong, and despite the personal tragedy of their situation, the pair engage in a politically and emotionally charged battle to see they receive the same treatment as any other couple.

Pam Grady: A decorated cop (Julianne Moore) discovers that she is terminally ill and tries to ensure that her pension will go to her partner (Ellen Page) only to face homophobia and an unfeeling bureaucracy in the ripped-from-the-headline drama Freeheld, penned by Philadelphia scribe Ron Nyswaner.

Nell Minow: Freeheld — for a #lovewins story with a brilliant cast.

Jennifer Merin: Brilliant performances by Julianne Moore and Ellen Page set fire to this compelling truth-based drama about a terminally ill police officer who is determined that her same sex partner receive her pension. A beautifully crafted film with an important theme.

Other Movies Opening the Week of September 28 – October 4:

September 28
If Not For His Grace
Unlikely Family
And so forth, listing all openers in alphabetical order

October 1
The Prey
Tim Timmerman: Hope of America
Imperfect Sky
Message From a Mistress
Confidence Game
Tattered Angel
Haraka
Sex, Lies and Snuff Online
After Ever After
The Lost Within
Stretch and Bobbito
Filmed
New Comic Day
Pilchuck: A Dance With Fire
Twenty Million People
We Could Happen
The Atlantan
Manbaby
Individually Wrapped
Strength in Union
Rumbula’s Echo
Winter Has No Sun
Poetrying
Roadie: The Documentary
Waiting in the Wings
League of Millions