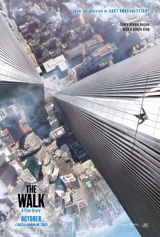 The story of Philippe Petit’s daring high-wire walk between the twin towers of the World Trade Center in 1974 is not a new one to New Yorkers or to film lovers: it was the subject of 2008’s Oscar-winning best documentary feature, Man on Wire. But we haven’t seen that story like this before. Robert Zemeckis has been a cinematic fantasist of the highest order, using magical FX to tell wondrous tales that could not exist anywhere but in the realm of movies: the Back to the Future trilogy, Who Framed Roger Rabbit. In The Walk, he puts CGI and IMAX and 3D to perhaps their most perfect uses ever, to re-create a real place that no longer exists and a real event that no one else on the planet ever experienced, nor ever could now. Read more>>