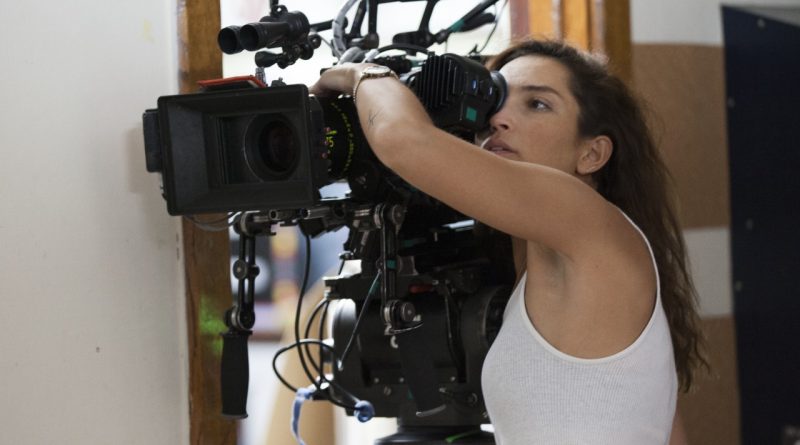 If there’s one thing I can say about Reed Morano’s Meadowland, it’s that it’s not an easy film to watch. A good film—yes. One of the most honestly, emotionally resonant films about grief ever made, in fact. But not easy. For those open to a cinematic experience with a side of catharsis, Meadowland comes out courtesy of Cinedigm on October 16th. Just have your Kleenex handy. We at AWFJ are proud to present the director as this month’s SPOTLIGHT subject.

Though Meadowland is Morano’s directorial debut, she’s by no means a newcomer to the film scene. She’s an experienced and highly acclaimed cinematographer whose credits include Frozen River, The Skeleton Twins and Kill Your Darlings. A glance at her IMDb page suggests that she must have more hours in the day than the rest of us.

For her directorial debut, she went with quite the heavy subject: A couple, Sarah (Olivia Wilde) and Phil (Luke Wilson), suffers the aftermath of the abduction of their young son a year prior. Sarah, unwilling or unable to admit her son is likely dead, spirals into depression and drug abuse, while her policeman husband Phil, on the surface the more emotionally staunch of the two, finds that he’s not keeping it together as much as he thinks he is.

Though Morano didn’t come up with Meadowland’s story—that credit goes to screenwriter Chris Rossi, also a co-producer on the film—she describes making it as an incredibly personal experience. The sudden death of Morano’s father when she was 18 was one point of entry; the emotional trauma that follows the death of a loved one—the sudden split of your life into before and after—is evocatively on display here. Morano describes a scene where Sarah aimlessly wanders around Times Square, sound and visuals an out-of-focus blur around her: “You can be in the biggest sea of people and yet be totally alone. It doesn’t matter that your world has fallen apart. These people are laughing, they’re having the time of their life. They’ll never know what you’re going through. When something like that happens, you feel like you’re living in the Twilight Zone. How can this be the real world?”

A more direct personal connection is the fact that Sarah and Phil’s son, Jessie, is played by Morano’s own son, Casey, who auditioned and was a “natural” for the role. “For the year that it took to make the movie, I was imagining my own son, because that’s literally the person that it was. It’s kind of fucked up, but it was very cathartic. It was a way to emotionally connect with the subject matter, in many ways very literally,” Morano recalls. “It was almost like my way of going through the experience with Olivia and Luke, to say, ‘Hey, I’m going to put myself through something with you guys. It’s not just you. You’re not going to be alone.’”

Every bit of sympathy was probably a good thing for Wilde, who was a new mother by the time filming began. “When Olivia came on board, she was not a mom yet. She had such a passion for the script and the role that I felt like she could do it, [even though] I initially imagined that an actress who was a mother would plan the role.” says Morano. “There’s something about being a mom—I didn’t understand that feeling at all until I became one. But there are so many things about Olivia that pushed me over the edge. I knew she could do it.”
And then, “as a sort of happy accident—for larger reasons than the movie!—she actually became pregnant while we were in the middle of raising money for the film. She was worried that we were going to try to recast the role, and I was like, ‘No, I’m definitely not recasting the role. We’ve been through everything together. We’re still making this movie. Let’s think of it as an awesome bonus, because now you’re going to have all this extra emotional baggage!’’”

On a more serious note, Morano credits Wilde’s determination to stick with the film during (to put it lightly) “a really emotional time”; filming began when the actress’ son was only a few months old.

Though first-time directors can often be thrown for a loop by the whole “working with actors” thing—knowing camera angles and tech is one thing, but being able to communicate the emotional needs of a scene to real-life human being is quite another—Morano jumped right in, knowing from personal experience working on sets that different actors have completely different ways of working. She and Wilde were of a more similar disposition, picking through Sarah’s emotional state with endless, detailed discussions. With Wilson, though, it was different. “I had already worked with him [on The Skeleton Twins], so I knew he was very private and internal on set,” Morano recalls. “But I felt like there was something untapped about Luke that I wanted to dig out. I had this hunch about him that he could go to this dark place… He had his own idea of how he was going to do things, and it wasn’t necessarily stuff he wanted to talk about.”

Morano describes a scene where Phil, up until this point very emotionally contained, “acts out and does something inappropriate.” (No spoilers, people.) In order to give Wilson his motivation, rather than straight-out say “This is what Phil is thinking,” she provided a scene from her own life: “My dad started this restaurant on Fire Island, and I didn’t go there for quite a while after he passed away. It felt like, that’s the place where he is. When I finally went to the restaurant, it was very emotional for me, because he was in every piece of driftwood that the building’s made up of. I was sitting at the bar with one of my dad’s old friends, and we were having drinks and talking about him and reminiscing. And suddenly I got so emotional, and I left and went into the office, locked the door, and proceeded to tear down all the files and the papers. I couldn’t stop myself in the moment, and I didn’t know why I was doing it. It was like mass destruction! And so when Luke didn’t understand why his character would [do what he did], I told him that story. And he was like, ‘OK,’ and he got out and did his interpretation.”

That intuitive approach is typical of Morano, who calls herself a “fly by the sea of my pants”-type filmmaker. “I have an affinity for telling stories with the camera on my shoulder, because I like to react in the moment,” she explains. “What I do like to plan in advance is what my goal for the scene is, but I don’t like to get too specific and run down the actual angles or shots. When I walk into a room and scout a location, I can tell you right away what direction I would prefer to shoot in. But when I step into this other role of being a director, it was no longer about me and about the cinematography. It was more about how I want to set up the best scenario that I can so that the actors can do what they want and I can just react.”

Now that Morano has her first film as a director under her belt, she’s moving onto another project—one that, she admits, won’t be “so dark”: The recently announced Lioness, starring Ellen Page as Lance Corporal Leslie Martz, who served in Afghanistan as the leader of the Marines’ first Female Engagement Team. The film, currently in preproduction, will show an “aspect of war that we’ve never really seen that well before,” Morano explains. “For me, the hearts and minds war is ripe for discussion, [about] how close the Marines have to get to the other side and how emotionally and mentally trying that was, because they became involved with these people. These were people they were with every day, and yet they had to, as part of their mission, find incriminating evidence against their family members and in turn hurt the people they cared about, [these] Afghan women and children.” Though press around the movie, Morano notes, has tended to emphasize the fact that Martz is a lesbian,“the story’s not even about that. That’s just a character trait. The story’s about a female marine trying to do her best and getting in over her head.”

So does the fact that Morano’s first two movies have female protagonists mean the director has a particular interest in female stories? Yes and no—she’s interested in stories that haven’t been told before, and many of those happen to be about women. Lioness “is a universal story. It just so happens to be told through the eyes of woman,” she argues. And while she admits that “subconsciously” she probably wanted her sophomore feature to be about a woman, “it’s not due me, as a female director, to tell a female story. It was more like, I just think we need to see more of them. If I was a man telling stories, I would probably want to do the same thing. That’s why there are quite a few male directors who tell female stories. It’s an untapped subject matter!”

With her excellent first film Meadowland, director and cinematographer Reed Morano has proven herself a talent to watch behind the camera—more than she had already, that is. With her upcoming film Lioness, a collaboration with Ellen Page, we’ll very likely be talking about her in the years to come.