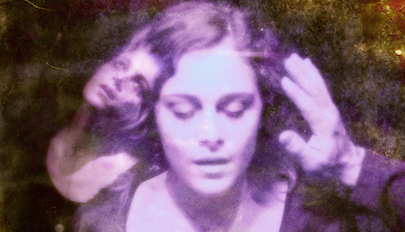 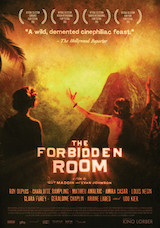 Opening October 2, the AWFJ Movie of the Week is The Forbidden Room, artist filmmaker Guy Maddin’s latest experimental work set in the claustrophobic confines of a marooned submarine deep below the ocean’s surface. Read on…

Or at least that’s where this hallucinatory journey, co-directed by Maddin and Evan Johnson begins. As it progresses the film, which plays like a series of fragmented, beguiling vignettes, soars high into the sky and explores the deepest, darkest regions of the human psyche.

Beginning life as Maddin’s interactive Seances project, in which the director channelled the spirits of lost silent movies through improvised live happenings, the film eschews traditional narrative form to instead seduce its audience through its poetic visuals, compelling ideas and inspiring performances from the likes of Charlotte Rampling, Geraldine Chaplin, Mathieu Almaric and Udo Keir.

Maddin’s first film since 2011’s The Keyhole, The Forbidden Room is another fascinating and ambitious and unique work from a director unlike any other working today.

Pam Grady: Guy Maddin’s first feature in four years, The Forbidden Room, is a fever dream evocation of lost movies, an alternate history of the cinema that might have been, and one of Maddin’s most inventive works.

Jennifer Merin: Guy Maddin. That’s all you have to say to me. This visionary Canadian director’s cinematic style is always fascinating. The Forbidden Room takes you down a surreally mystical route of silent movie tropes that add up to a plot that’s not quite there, but has the full impact of a gripping thriller.

Other Movies Opening the Week of October 5 – 11: