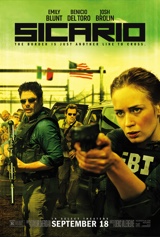 The “War on Drugs” may be a nonsense term invented by our overlords to justify overly aggressive policing on local and national levels, and indiscriminate and excessive imprisonment for minor infractions. It may be a self-perpetuating excuse for a never-ending rain of cash for institutions such as for-profit prisons and federal agencies and individuals like cops on the beat and on the take. But the “War on Drugs” has never felt more like an actual war than in Sicario. Yet this is no bit of propaganda designed to sell us that war; it is a scathing condemnation of the lawlessness that the “War on Drugs” has fostered in those fighting it, even — especially — on the side of the supposed good guys. Read more>>