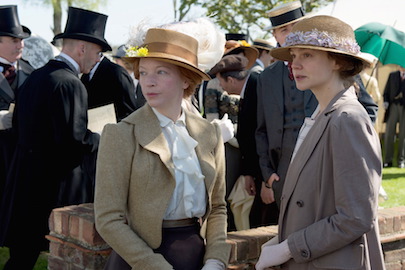 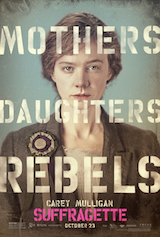 Opening October 23, the AWFJ Movie of the Week is Suffragette, British director Sarah Gavron’s phenomenal portrait of the brave women at the vanguard of the rights to vote campaign in the early 20th century in Britain. Specifically, Gavron and master screenwriter Abi Morgan (Shame, The Iron Lady) have chosen to set their film in the seminal year of 1912 when, disheartened by the lack of progress, movement leader Emmeline Pankhurst (a commanding cameo by Meryl Streep) decreed that words should become action. And so it was that peaceful protest and political machinations turned into guerilla warfare, bands of women creating civil unrest to draw attention to their cause; and, often, ending up behind bars, isolated from their families, subject to the most heinous public shame and physically tortured.

Caught up in this maelstrom is young factory worker Maud Watts (a stunning Carey Mulligan), whose friendship with colleague and activist Violet (Anne-Marie Duff) sees her meeting like-minded women such as chemist Edith Ellyn (Helena Bonham Carter) and draws her into the Suffragette movement. Although initially sceptical about the need for change, as the blinders are ripped from her eyes Maud realizes she must play her part to secure a brighter future for women across the country – which means equal pay, parental rights for mothers, access to education and a slew of other human rights — all of which she and other women of all social and economic classes were denied. While her actions have a devastating effect on her relationship with her increasingly confused husband (an excellent, nuanced performance from Ben Whishaw) and young son, and appalling treatment at the hands of the authorities, Maud’s determination to fight for her rights never falters.

Suffragette is, without doubt, a game-changer when it comes to the issue of women in film. It not only sheds light on a pivotal, and little seen, moment in women’s’ history, but it also features a plethora of strong female talent both in front of and behind the camera. The cast, led by a never-better Mulligan, are exceptional, while Gavron and Morgan front a predominantly female production team lead by Alison Owen and Sarah Ward. All are at the top of their game.

It’s also a film that, despite its historical setting, is entirely relevant. This is no staid period piece; shot like an action film, with handheld cameras and 360-degree sets, it’s visceral, bloody and moves at a breathtaking pace. Crucially, too, many of the things these women were fighting for – primarily, equal pay – are still not within our grasp, and so Suffragette is not just a celebration of how far we’ve come, but also a visceral reminder of how far we still have to go.

Nell Minow: Suffragette — the story of one of the most important civil rights movements in history.

Jennifer Merin: Telling the story of the brave British women who fought for their right to vote, Suffragette is an absolutely superb and thrilling historical drama made by women (producers, director and scriptwriter), about women and for EVERYONE. Suffragette is an equal opportunity film! Read interview with producers Alison Owen and Faye Ward.

MaryAnn Johanson: It is angry and passionate and defiant. Suffragette is no staid, respectable costume drama, not in the vigor and grit with which it is presented, not in the sheer entertainment value it provides alongside its history lesson, and certainly not in its absolute relevance for today. Read review>>

Susan Granger: On the Granger Movie Gauge of 1 to 10, “Suffragette” is a struggle-filled 7. And fiery Mulligan is the source of the film’s strength.Read review

Other Movies Opening the Week of October 20 – 26