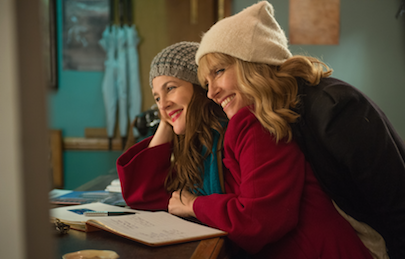 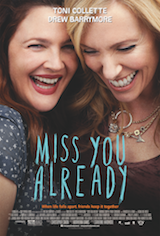 Opening October 23, the AWFJ Movie of the Week is Miss You Already, director Catherine Hardwicke’s (Thirteen, Twilight) drama about a lifelong female friendship put to the test by serious illness starring Drew Barrymore and Toni Collette. Read on…

The title may bring to mind flippant adolescent attachments, but Miss You Already is, in fact, an astute study of adult female friendships, as seen through the intense prism of terminal illness. Transplanted American Jess (Barrymore) and Londoner Milly (Collette) have been friends since childhood, standing firm in the face of teenage traumas, university excess, marriages and kids until Milly is diagnosed with aggressive breast cancer.

While the terms of Jess and Milly’s pre-diagnosis friendship are established in the shorthand of montage and anecdotes, the enduring strength of their bond is immediately obvious – as is the utter devastation of the physical and emotional bombshell thrown into their midst.

This is thanks to Morwenna Banks’ spot-on screenplay, which mines the joyful highs and soul-searching lows of the situation, and Catherine Hardwicke’s direction, which revels in the bliss of sisterhood and unflinchingly confronts issues of mortality and loss. Indeed, it’s the film’s stark honesty that steers it well clear of melodramatic ‘movie of the week’ territory. While some sequences may, in isolation, seem heavy-handed – the girls dancing on the bleak Yorkshire moors, Milly’s messy swan-dive off the rails – in the context of their colourful, authentic friendship they feel entirely appropriate.

As Jess, Barrymore is effortlessly endearing, an unflappable voice of reason to counterbalance Milly’s increasingly wayward antics, but this is undoubtedly Collette’s film. Her performance as a vibrant woman cut short in her prime – and railing against her fate every step of the way – is inspiring, devastating and humbling. It’s true that all other characters remain squarely on the sidelines, most notably Jess and Milly’s husbands Jago (Paddy Considine) and Kit (Dominic Cooper), but this is fitting for a story so explicitly concerned with female relationships.

Indeed, it’s utterly refreshing to see such strong women defined not by their interactions with male protagonists but by their connection to each other, and Barrymore and Collette make the absolute most of this opportunity, with their palpable chemistry driving the film. Make no mistake, this is a love story as tender, passionate and powerful as any you’re likely to see.

Other Movies Opening the Week of November 3 – November 9