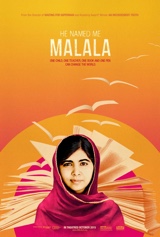 She arm-wrestles her little brother. She teaches her dad how to tweet. She giggles at the suggestion that she finds Roger Federer cute. She’s just an ordinary teenager. Who has become a potent feminist symbol around the world. Who is the youngest winner ever of the Nobel Peace Prize (in 2014). And all because she was shot in the head by a Taliban soldier for daring to publicly state that girls should be allowed to go to school. (Boy, did that backfire on those primitive idiots.) Working from her book I Am Malala, documentarian Davis Guggenheim introduces us to the young woman — she turned 18 this summer — behind the headlines and the photo ops. Read more>>