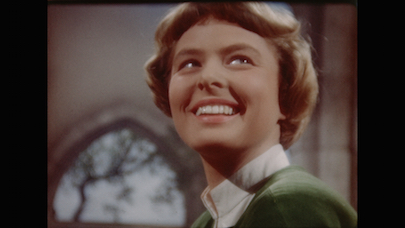 Opening Nov. 13, AWFJ’s Movie of the Week is Ingrid Bergman: In Her Own Words, the intimate biopic of the legendary siren of the silver screen by Swedish writer, director and film critic Stig Bjorkman. Read on…

It was Bergman’s daughter Isabella Rosselini who first suggested that Bjorkman might like to make a film about her iconic mother and, as a result, the film has been constructed from Bergman’s personal archive. Diaries, pictures, home movies and interviews with family members skew more towards her home life than her celebrated big screen career, and so paint a colourful personal portrait of Bergman.

Indeed, the film skips lightly over Bergman’s incredible Hollywood career, which took in the likes of Gaslight, For Whom the Bell Tolls and, of course, Casablanca, instead concentrating more on her fascinating private life. She adored all of her children, who are all present to provide their own touching remembrances, and it’s clear that, for her, her greatest role was as a strong, independent role-model for her kids. Bergman passed away from breast cancer in 1982, on her 67th birthday, but, as this superb documentary proves, she has left an indelible legacy that goes way beyond her big screen persona.

Pam Grady: The public and private lives of a legend comes into sharp focus in Ingrid Bergman: In Her Own Words, a documentary that paints an evocative portrait of the artist through her diaries, letters, interviews, home movies, and the remembrances of those who know her.

Nell Minow: Ingrid Bergman: In Her Own Words — A fascinating story from a brilliant performer.

Leba Hertz: Who wouldn’t want to see a film about this actress, who was one of the greats? We’ll always have Ingrid.

Jennifer Merin: With access to Ingrid Bergman’s diaries and other personal memorabilia, documentarian Stig Bjorkman presents a beautifully framed biopic and tribute to one of cinema’s most fascinating actresses and celebrities. You’ll be thoroughly engaged.