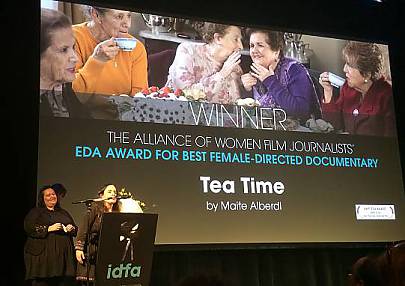 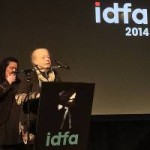 The Alliance of Women Film Journalists will proudly present our juried AWFJ EDA Award @ IDFA 2015 for the Best Female Directed Film. This is the second consecutive year of the organization’s partnership with IDFA to recognize women’s accomplishments in documentary filmmaking. In 2014, the AWFJ EDA Award @ IDFA was presented to Maite Alberdi for Tea Time The AWFJ EDA Award and the Oxfam Global Justice Award are the only two independently-presented awards on the IDFA Awards roster. Read more>>

Nominations for the AWFJ EDA Award for Best Female Directed Film are made by IDFA. There are ten nominated films.

IDFA, the International Documentary Film Festival Amsterdam, is the world’s largest and most influential documentaries-only film festival. Founded in 1983, and is unique for its international film program featuring a wide variety of documentary genres with political and socially conscious themes. The festival presents many European and world premieres each year, and is a major annual gathering place for filmmakers, producers, distributors and students to meet and network.