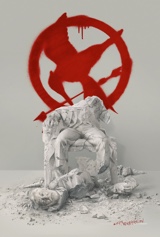 There are many ways in which the Hunger Games series has been groundbreaking. It has given us a female world-changing heroine in the mold of the countless boys and men Hollywood has cast in such a role, and showed the caricature up by depicting her as more human than most of them: more conflicted, more unsure, more afraid yet also more brave for overcoming all that… and also simultaneously more principled and more selfish. Katniss Everdeen has never been about some romantic, idealistic notion of heroism; she has always been about protecting the people she loves. She has always been fully, plausibly human. Read more>>