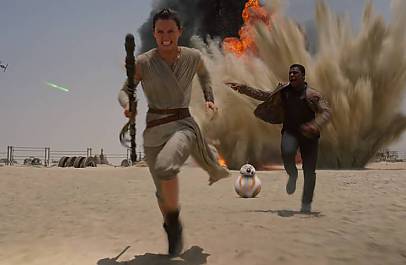 Opening Dec. 18, AWFJ’s Movie of the Week is Star Wars: The Force Awakens, a film which surely needs no introduction other than to say it’s the latest instalment in the classic sci-fi franchise, helmed by JJ Abrams. Read on…

Written and directed by Abrams, the film reunites the original trilogy’s cast Harrison Ford (Han Solo), Mark Hamill (Luke Skywalker) and Carrie Fisher (Princess Leia) with newcomers John Boyega, Daisy Ridley and Adam Driver. With plot details tightly under wraps, anticipation rides on that tantalising casting and the fact that Abrams is a filmmaker of proven vision and genre mastery; he previously revitalised the Star Trek franchise for a new audience while keeping its core traditions alive for die-hard fans. Whatever the story, rest assured Abrams will ensure that the force is as strong as ever before.

Pam Grady: The first Star Wars film in over 30 years to star the original cast alongside newcomers that include Oscar Isaac and Adam Driver and with J.J. Abrams directing, expectations are running high for a reborn franchise with Star Wars: The Force Awakens.

Leba Hertz: The most anticipated movie since the creation of the universe just better be good.

Sheila Roberts: My recommendation is Star Wars: The Force Awakens. Based on George Lucas’ positive reaction this week after seeing the finished film, it promises to be the epic adventure we’ve all been waiting for. It features J.J. Abrams’ inspired vision and direction as well as the original franchise stars Harrison Ford, Mark Hamill and Carrie Fisher and newcomers John Boyega, Daisy Ridley and Adam Driver. Back in 1977, Star Wars was one of my most memorable theatrical experiences. It’s great to know that The Force is still with us.

Other Movies Opening the Week of December 15 – December 21