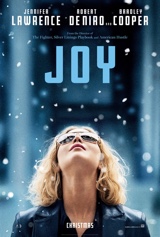 Oh no. Does David O. Russell have his first dud on his hands? I know lots of people aren’t thrilled with his 2004 film I Heart Huckabees (I like it), but for the first time since he realized that Jennifer Lawrence and Bradley Cooper belong onscreen together — theirs is a chemistry that will be the stuff of Hollywood legend, I have no doubt — the result is something that never quite gels. Russell isn’t wrong about Lawrence and Cooper: it’s only when they are paired up here that the movie comes alive. But they’re not paired up onscreen anywhere near enough to pull off Joy as an entertaining whole. Read more>>