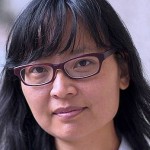 It has been a whirlwind year for filmmaker Jennifer Phang, since Advantageous made its world premiere at the 2015 Sundance Film Festival. where she and Jacqueline Kim, Phang’s co-screenwriter as well as star, were awarded a special jury prize for collaborative vision. The film has found a home with Netflix and has been nominated for the John Cassavetes Award, the Independent Spirit Award prize for the best film with a budget of under $500,000. Read on…

Advantageous isn’t the first success in Phang’s decade-long cinema career. Her award-winning first feature, Half Life, premiered at Sundance in 2008 and at Tokyo International Film Festival, screened at SXSW and was distributed by the Sundance Channel. She participated in the Sundance Screenwriters Lab with her screenplay, Look for Water, and has received grants from Sundance Institute Annenberg Feature Film Fellowship and Sundance CineReach, as well as the Tribeca Film Festival L’Oreal Women of Worth Vision Award. Phang also holds an MFA from AFI’s prestigious Directing Program.

Advantageous is a film that explores society’s obsession with ageless beauty and a mother’s infinite love, and the tensions between those two – in this case, conflicting elements. The inherently feminist subject is one that is a core concern for Berkeley-born, San Francisco-based Phang.

“I’ve observed women in trouble, pretty much on a daily basis, especially when I was living in New York,” says Phang. “Looking at how they compromise and how they work to achieve either security or status or security by way of status and then how they try to transfer that status to their children.”

In Advantageous, a future world is inhabited by single mom, Gwen (Jacqueline Kim), and her young daughter, Jules (Samantha Kim). It is a world where Gwen’s status is set by her role as the public face for the Center for Advanced Heath and Living. As she ages and her beauty fades, her job security is in jeopardy and she’s worried about her daughter’s future. In order to maintain her position, she agrees to undergo radical cosmetic surgery.

Advantageous, Phang’s sophomore feature, expands on her 2012 eponymous short. Commissioned by ITVS for its “Futurestates” sci-fi program, the short was full of ideas that couldn’t be fully explored due to length constraints. Bringing back the short’s core cast of Jacqueline Kim, Samantha Kim, Freya Adams as Gwen 2.0, and James Urbaniak as Fisher, a Center executive, Phang has delved into the full range of ideas that spin from society’s obsession with youth and beauty and how it impacts women in the workplace. Fictional Gwen’s predicament is commonplace for women in real life.

“I’d been exposed to the idea of cosmetic surgery, makeup, exercise, diet every moment of my life. As a woman growing up in the United States and Asia, people just naturally want to talk about appearance. It’s almost like a default subject in small talk,” says Phang. “I felt really uncomfortable when I was around women who were either pursuing an ideal or they were upset about their own ability to match an ideal. All of those things felt like a mirror to me and I felt upset and didn’t want to be around women who were continually upset about their own status. I felt disempowered by that.”

There is also the idea of parents sacrificing for their children. The choice facing Gwen is extreme, but Phang only needed to look back at her own childhood to observe the lengths a mother will go for her kids. For a time when Phang was growing up, her father was working in Malaysia while her mom held the family together in the States. Her mother worked two shifts at three hospitals and would work graveyard so that she could sleep while Phang was in school.

“It was just part of life — her fatigue, her effort and her struggle,” Phang says. “When I was younger, I just took that as part of existence, but now looking back and looking at the way other families work, I understand the stress she was going through.”

Critical reaction to Advantageous has been mostly positive, but there has been a bit of a gender divide, something that Phang anticipated—not that that made it any easier to take. 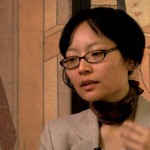 “When there was a gender divide at Sundance in terms of criticism and all the female journalists saw the value much more clearly, I was not surprised, but I was a little disappointed that I was not surprised,” Phang says. “I had been receiving a lot of great feedback from male viewers in advance of putting it out in the world, but we also did anticipate that the film would provoke a little bit of reaction from people who were generally closed off to the idea of a woman’s voice, a strong woman’s voice that challenges them.

“The real audience has been much more interesting to watch,” she adds. “You’ll get these champions that are just so glad that there’s an interesting film out there from a female perspective that’s also science fiction, and that also talks about something of importance to them and their daughters and sons.”

A tipping point for women in the film industry?

The timing of Advantageous’ release is intriguing. 2015 is the year in which Hollywood, independent cinema, and the film festival world all took notice of gender disparity within the film industry. From Jennifer Lawrence and others noting the uneven pay between men and women to grant initiatives and fellowships targeting women to film festivals championing women filmmakers, suddenly the status of women in the industry is a subject of intense scrutiny. But is that a sign that things are actually about to change? From her vantage point of a working filmmaker promoting her work, Phang has been privy to the conversation firsthand.

“I certainly hope it’s a tipping point. Through the process of putting Advantageous out into the world, I definitely sensed—especially from women journalists—a passion and a kind of unity,” she says. “I think, at least from where I’m sitting, I sense a shift, I feel fortunate to be existing at a time when there is energy behind it. I just hope that we can sustain it.”

Why We Chose Her: We shine the AWFJ SPOTLIGHT on Jennifer Phang because her work is extraordinary. Advantageous is one of the best films of 2015, a film that makes a virtue of its low budget in building a credible New York of the future and that ingeniously uses science fiction to explore issues and concerns of 21st century women and imagines how those things will continue to resonate far into the future if the status quo doesn’t change. Jennifer Phang is a filmmaker to watch!

— Pam Grady authors the SPOTLIGHT feature for AWFJ.org. She is a prominent San Francisco-based critic and film journalist who writes for the San Francisco Chronicle, Box Office, FilmStew, SF State Magazine and other publications. Her career began at Reel.com where she was an editor and staff critic. She is a member of AWFJ and the San Francisco Film Critics Circle.