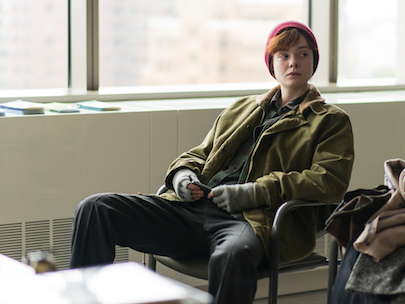 Opening Dec. 31, AWFJ’s Movie of the Week is About Ray, which stars Elle Fanning (Malificent, Trumbo) as a young woman who makes the decision to transition from female to male. Read on…

Written by Nikole Beckwith (Stockholm, Pennsylvania) and directed by BAFTA Scotland-nominated British filmmaker Gaby Dellal (On a Clear Day, Angels Crest), the drama also stars Naomi Watts as Ray’s mother who struggles to come to terms with her daughter’s life choices while also trying to track down Ray’s biological father (Tate Donovan) who needs to co-sign the consent form for his daughter’s gender reassignment surgery. Completing the trio of exceptional women is Susan Sarandon, who takes the role of Ray’s lesbian grandmother; a woman who also finds it difficult to accept Ray’s transexuality.

A colourful family drama populated with a cast of exceptional actors, About Ray takes an intimate, sensitive look at the fluid nature of identity and the redemptive power of acceptance.

Nell Minnow: About Ray — exploring the infinite variations of human gender and sexuality and the infinite love of family.

Jennifer Merin: Commanding performances by three powerful actresses in a film that’s directed and written by women. That’s About Ray, and I’m all for it!