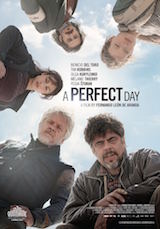 Opening Jan. 15, AWFJ’s Movie of the Week is A Perfect Day, the new drama from Spanish writer/director Fernando Leon de Aranoa about a group of aid workers attempting to resolve a crisis in an armed Balkan conflict zone. Read on…

Olga Kurylenko (Seven Psychopaths) and Melanie Thierry (An Eye For Beauty) are joined by Benicio Del Toro (Sicario), Tim Robbins (Welcome to Me) and Fedja Stukan (As If I Am Not There) for a film which blends sharp political commentary and ironic humour to bring a palpable, authentic sense of humanity to the story behind the headlines.

Beautifully shot by cinematographer Alex Catalan, who also lensed last year’s atmospheric Spanish police drama Marshland, A Perfect Day was awarded a ten-minute standing ovation when it screened at Cannes in 2015. See it, and understand why.