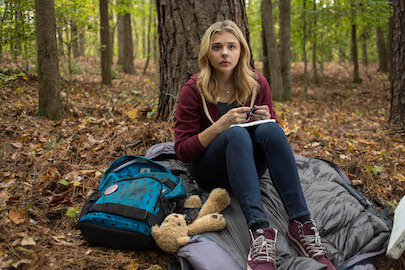 Opening Jan. 22, AWFJ’s Movie of the Week is The 5th Wave, which stars Chloe Grace Moretz (Clouds of Sils Maria, Let Me In) as a teenager struggling to survive after alien attacks have destroyed most of Planet Earth. Read on…

This adaptation of Rick Yancy’s YA Novel by screenwriters Susannah Grant (The Soloist), Akiva Goldsman (Insurgent) and Jeff Pinkner (The Amazing Spider-Man 2) is directed by J Blakeson, who previously penned the screenplays for The Descent: Part 2 and The Disappearance of Alice Creed – the latter of which was also his directorial debut.

It is set in a world that has been virtually decimated by four waves of violent extra-terrestrial attacks; the first of which saw power supplies shut down, the second unleashed a deadly virus, the third saw floods wipe out large areas and the fourth was a widespread ground invasion in which the marauding aliens began to take human hosts. As the fifth wave – the complete annihilation of the human race – looms, Moretz’s Cassie must fight against the odds to take care of herself and her younger brother.

Intended as the first in a new YA franchise akin to the likes of the wildly popular Hunger Games and Divergent series, The 5th Wave benefits hugely from having Moretz at the helm. A young actor of diverse range and natural charm, Moretz navigates the well-worn tropes of such films with aplomb and brings a sense of natural realism and emotion to the outlandish proceedings. She is ably supported by a solid cast, including Maria Bello as a no-nonsense army sergeant.

Jennifer Merin: In The 5th Wave, Chloe Grace Moretz as young Cassie Sullivan sets out to save her brother and civilization from terrifying aliens, making this a satisfying femme-centric sci-fi thriller.