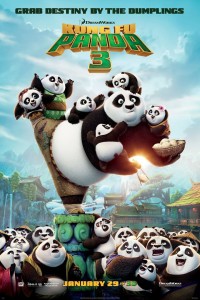 Kung Fu Panda 3, the latest in the popular animation franchise, tracks the young panda (voiced by Jack Black) as he seeks enlightenment through the art of self defense and defending others. Again joined by Tiger (voiced by Angelina Jolie), the young kung fu fighter follows his path by teaching others how to protect themselves against and undo evil. The story is charming, the animation colorful and the message admirable. And the film is co-directed by Jennifer Yuh, who did a great job of solo-helming Kung Fu Panda 2, which was an enormous femme-helmed box office hit. This entertaining family film will bring out your inner kid. Read more…

Fifty Shades of Black is a spoof on Fifty Shades of Grey, Sam Taylor-Johnson’s high-grossing movie adaptation of E.L.James’ cult-followed eponymous novel about sexual domination of a young woman by an older man. Another box office hit helmed and written by women. Here, the characters are all African-American, and the gags are sit-com situational and slanguage-y. Black’s irreverent satire cuts through much of the relentlessly serious tone of Grey and, in doing so, scores points. But I find it difficult to see any social relevance in either film. I mean, what’s the point? Is this what we’re looking for on the path to greater diversity in Hollywood production?

The Boy stars Lauren Cohan as a nanny who’s hired to take care of an English couple’s son – and the boy turns out to be s life size doll. The film sounds like it might be an odd twist on Lars and the Real Girl, but it isn’t that at all. No quirky sweetness to it. This is the week’s femme-centric horror offering, with plot twists that lead the nanny and you to wonder whether the boy doll is alive. No huge screams, but unsettling plot sure plays interesting games with your head.