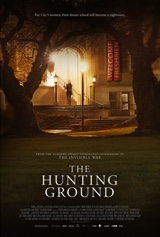 Following on from The Invisible War, his film about the rape epidemic in the U.S. military, documentarian Kirby Dick looks at rape on American college campuses… and The Hunting Ground is almost the same film, and just as enraging. This is not a criticism of Dick as a filmmaker but of our culture, which places the safety of women on a list of things worth worrying about far below such other matters as “institutional pride” and “making a profit.” Read more>>