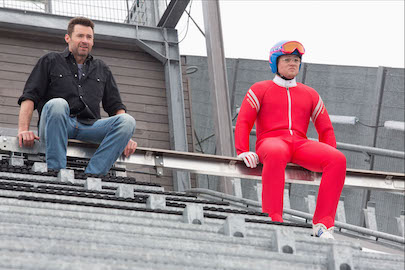 Opening Feb. 26, AWFJ’s Movie of the Week is Eddie the Eagle, the big screen biopic of unlikely British sporting hero Eddie ‘The Eagle’ Edwards, who took the world of ski jumping by storm in the 1980s. Read on…

Directed by actor-turned-filmmaker Dexter Fletcher (the excellent Wild Bill and Sunshine on Leith), the film stars Taron Egerton (Kingsman: The Secret Service, Testament of Youth, Legen) as Edwards, a man who despite his heavy build and poor eye sight, was determined to become a champion skijumper. A lack of funding also proved a hurdle, but Edwards went on to represent Great Britain in the 1988 Olympics and become a poster boy for underdog heroics.

Leba Hertz: My pick is Eddie the Eagle, an inspirational movie about a guy with no athletic ability who persevered to compete in the Olympics.

Anne Brodie: An inspiring true story brought to the screen, with a wonderful role for Hugh Jackman.

Jennifer Merin: Just after we picked Race as last week’s Movie of the Week, along comes another inspiring sports biopic that shows how fearless and determined British Olympic ski jumper Eddie “The Eagle” Edwards overcame physical disability and to the amazement of all doubters – including his parents– flew in the face of danger to triumph on the slopes. Eddie is pure inspiration, and the portrayal of him as he grew up and into the sport is golden.