It’s been a season of honors for Sixel. The Oscar is just the latest addition to the many she has already received—a list that includes a BAFTA, the Australian Film Institute’s AACTA, and AWFJ’s EDA Award, among others—for her work in giving shape, form, and nail-biting tension to Mad Max: Fury Road. After over 30 years in the business, it was Sixel’s first action movie. It will certainly not be her last. Read on…

“It took enormous creative courage and guts to make this film,” said Margaret Sixel in accepting the Academy Award for best editing for Mad Max: Fury Road, becoming the 12th woman to win the Oscar in the category. “I just want to say thanks to George Miller, Doug Mitchell and the whole crew that endured six months in that Namibian desert to bring back the most amazing footage. But honestly, it’s in the edit room that the final … that the film is finally forged. It’s the final rewrite.” 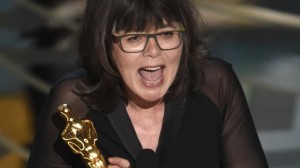 The South African-born Sixel was a teacher and a photojournalist before she turned to editing. She earned a Specialist Extension Certificate in Editing in 1989 from the Australian Film Television and Radio School, but by then she had already put in five years in the industry, working her way up the ladder. Her career launched in 1984 when she was a dubbing assistant and assistant editor on The Last Bastion, a TV miniseries, and second assistant editor on The Great Gold Swindle, a made-for-TV crime drama. She worked in a variety of capacities in the editing room before getting her first editor credit in 1994 for the docudrama Mary.

The Art of Collaboration

Sixel first worked withwriter/director George Miller—her husband since 1995—in 1994 when he was the co-director on The Last Bastion. She went on to edit Babe: Pig in the City (1998), a film for which Miller credits her for improving the story structure with her suggestion of the addition of chapters and the Greek chorus of singing mice, and Happy Feet (1996) for him. But when he asked her to edit Mad Max: Fury Road, she initially declined. He was going to be away on location in Namibia for close to a year and they are parents to two teenage sons.  Luckily for the film, Miller convinced her change her mind. 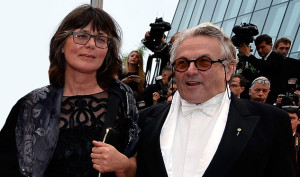 Mad Max: Fury Road was a massive undertaking. Up to 20 cameras could be operating in a single scene of the dystopian action thriller as the forces of tyrant Immortan Joe (Hugh Keays-Byrne) chase heroes Mad Max Rockatansky (Tom Hardy) and Imperator Furiosa (Charlize Theron) across the Australian outback. Sixel was receiving 10-20 hours of footage every day.

“We didn’t really have any dailies, because there was so much” Sixel told the Los Angeles Times. “You wouldn’t do any work if you watched them all. “So I’d sort of triple-speed through the footage, so I could actually do some work.” 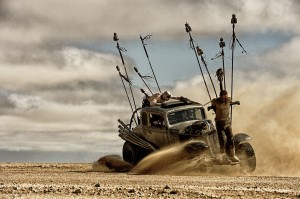 In the end, Miller shot 480 hours of footage that Sixel pared down to a sleek 120 minutes. Mad Max: Fury Road was shot chronologically, a help in the editing room as Sixel and her team were able to start assembling a cut of the film. She was also able to deliver cuts to Miller in Namibia, allowing him to decide whether further work was needed on scenes. Once he returned from Africa, their collaboration intensified as the film began to take shape.

An Editor’s Own Sensibility>

“I try to be as prepared as possible before George steps into the room, and I know what he expects,” said Sixel in an interview with Avid.com. “This was not an easy film to cut, and the overall orchestration was more challenging than any one scene. I created multiple versions of each scene and ordered them in terms of my favorites. Some of it looks deceptively simple, but the variables were enormous. Every sequence had a huge number of hours put into it, and every scene had to earn its place. No fat. No repetition.”

Mad Max: Fury Road is not simply a George Miller movie. His editor brings her own sensibility to it. Her approach to editing is that it should add to the storytelling. Every cut should have a purpose and add information. 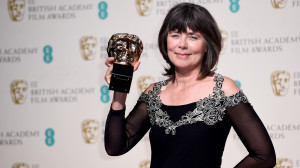 “I’m not a Michael Bay fan. I don’t like meaningless cutting. It irritates me,” she said in the Los Angeles Times interview. “The guys in the cutting room would laugh.

“I’d cut a shot of the Interceptor [Mad Max’s iconic car] out,” she added. “We had a few hardcore fans in the cutting room and they’d [gasp] and say, ‘You can’t do that!’ I’d say, ‘Why can’t I?’ They’d say, ‘The fans want to see the Interceptor.’ And I’d say, [groaning] ‘But it just slows everything down. Moving on here!’”

Why Did We Choose Her:

We chose Margaret Sixel for this month’s SPOTLIGHT because Mad Max: Fury Road is a towering achievement. Her collaboration with George Miller breathes new life in an old franchise. Women have been in the editing suite as long as their have been movies. In earning her first Academy Award, Sixel joins a sisterhood that goes back to 1934—the first year Oscar awarded editors—when Anne Bauchens (who would become the first woman to win the editing prize six years later for North West Mounted Police) was nominated for Cleopatra and that includes her fellow nominees this year, Star Wars: Episode VII – The Force Awakens‘ editors Maryann Brandon and Mary Jo Markey. Sixel is the second woman film editor to be in AWFJ’s SPOTLIGHT, following Thelma Schoonmaker in March, 2014.