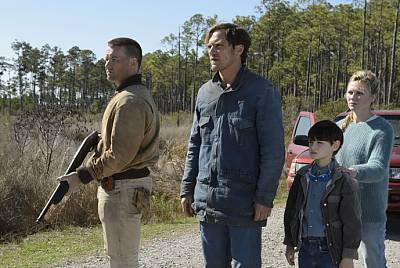 Nichols has made a career out of penning and directing intelligent, effective human dramas, from his 2007 debut Shotgun Stories through 2011’s psychological masterpiece Take Shelter (also starring Shannon) and 2012’s Mud, which featured a stunning turn from Matthew McConaughey. His latest follows in the same vein, this story of a father (Shannon) and son (Jaeden Lieberher) on the run due to the boy’s striking capabilities, which have drawn the attention of a shadowy cult. The film is both an intimate family portrait and a captivating thriller.

Kirsten Dunst gives another powerful performance as the young boy’s desperate mother, while the cast is rounded out by Sam Shepherd as the cult leader and Joel Edgerton as a state trooper supporting the family in their bid for freedom.

Having wowed audiences on the festival circuit, Midnight Special is sure to enthrall cinemagoers and marks Nichols as a filmmaker of extraordinary vision and talent.

Thelma Adams: My pick is Midnight Special. I’ve seen it and it’s a terrific little scifi thriller family saga. While Kirsten Dunst plays a mother and it is not the lead role, I will watch her in anything. Since Melancholia, she has become one of my favorite actresses. This movie puts the E in eerie.