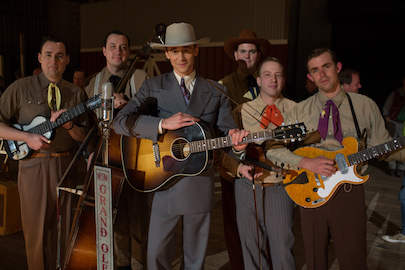 Opening March 18, AWFJ’s Movie of the Week is I Saw the Light, the new music biopic which stars Tom Hiddleston as country-western legend Hank Williams who wowed Fifties America with songs including ‘I’m So Lonesome I Could Cry’ and ‘Cold Cold Heart’. Read on…

Written and directed by producer/filmmakers Marc Abraham (Flash of Genius, 2008), who has previously produced films including Children of Men (2006), The Last Exorcism (2010) and Robocop (2014), the screenplay is adapted from the celebrated Hank Williams biography by Colin Escott, George Merritt and William MacEwen. Hiddleston has undertaken months of vocal training to inhabit the role of Williams, whose stellar rise to fame in 1950s America had a devastating impact on both his personal life and his health. Elsewhere, Elizabeth Olsen takes the role of his first wife, singer Audrey Mae Williams, while Bradley Whitford is cast as promoter Fred Rose whose regular on-screen narration, along with location and date title cards, keeps the chronology intact.

With some excellent cinematography from Dante Spinotti (Public Enemies, Tower Heist) and a crowd-pleasing soundtrack, I Saw the Light should have an appeal that goes beyond the devoted Williams and Hiddleston fan bases.

Pam Grady: Months of vocal training with singer-songwriter Rodney Crowell pay off for Tom Hiddleston, who seems to inhabit the very soul of country-western legend Hank Williams, right down to the haunting yodel, in the biopic I Saw the Light.

Leba Hertz: I’m glad to see Tom Hiddleston get a role he can sink his teeth (and singing voice) into.