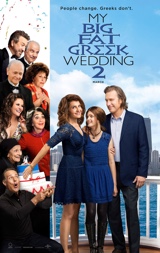 I recently rewatched the original My Big Fat Greek Wedding, which I enjoyed back in the day but had not seen since it was new in 2002. And it holds up well: it’s not perfect, and it’s a bit too heavy on the ethnic humor and sitcom schtick, but at its core there is a sweet story about a young woman coming out of her shell and finding herself in a way that her loving but overbearing family hadn’t allowed her to do before. That’s not the sort of story we often see in mainstream Hollywood films, and that may be why the movie was such a huge success: it gave voice to a sort of character who doesn’t typically get a voice on the big screen, and underserved women moviegoers longing to see something of their own lives reflected in a movie responded to that. Read more>>