Miles Davis may be the main subject of Don Cheadle’s bravura writing/directing debut Miles Ahead, but he’s not the only one. While the largely fictional drama mostly takes place in the 1970s, it finds the jazz great at a point in his life where he is looking back and what he is looking back at is not a time in his life, but a person: Davis’s first wife, dancer Frances Taylor. Cheadle portrays her as the great love of the trumpeter’s life and inspiration for his music, but he also underlines that she was an accomplished individual with her own talents and her own life. Taylor danced on Broadway, including in the original production of West Side Story and she was a member of the Paris Opera Ballet. Read on…

To play this amazing woman took another. and Cheadle found her in the amazing Emayatzy Corinealdi, an actress who is fearless in tackling strong and challenging women’s roles. in 2012, her feature film debut as the lead in Ava DuVernay’s Middle of Nowhere brought her into the spotlight with a Gotham Award win for Breakthrough Actor, and also got her nominations for an Independent Spirit Award for Best Female Lead and for the NAACP Award for Best Actress.

The daughter of an Ohio-born African-Anerican mother and a Panamanian dad, Corimealdi (36) was born in Fort Knox, Kentucky. Her military family relocated frequently to bases in New Jersey, Germany, Kansas and Ohio. She learned a lot about life from moving from place to place and has applied her understanding and experiences to her acting career, which started with studies in New Jersey at the Actor’s Training Studio, then at the William Esper Studio in New York, then at Playhouse West.

Since Miles Ahead premiered at the 2016 Sundance Film Festival, Corinealdi’s extraordinary performance as a woman who never loses her sense of self during a turbulent relationship with a difficult man, has attracted the kind of acclaim that leads to awards consideration. Although it’s still early in the year, the buzz is building as reviews roll in as Miles Ahead rolls into theaters around the globe this month. Cornealdi’s performance — along with writer/director/star Don Cheadle’s brilliance — have earned Miles Ahead the AWFJ Movie of the Week endorsement. 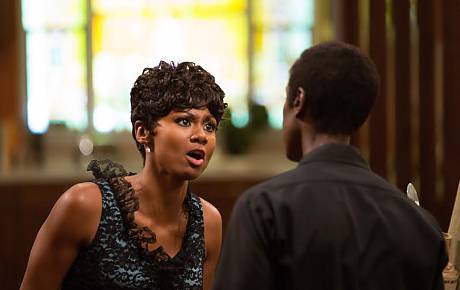 Corinealdi was enjoying Miles Ahead’s triumphant Sundance Film Festival world premiere when she sat down to talk about her joy at getting the opportunity to occupy the skin and emotional life of an exceptional woman.

SPOTLIGHT: The first thing I did when I got home from seeing your performance in Miles Ahead was to Google Frances Taylor. She is such a strong character and she clearly had a thriving career when she married Miles Davis. I was disappointed that I couldn’t find much. What was your research like?

EMAYATZY CORINEALDI: It surprised me. There wasn’t a lot. Google is the first place I went, too. A lot of my research came from her directly, talking to her and sharing personal stories. Between what bits I could find on Google and what not and talking to her and talking to Don Cheadle — he told me things he knew about her. I put that all together, but she was my main resource. I also read Miles’s autobiography. He wrote about her and their relationship. 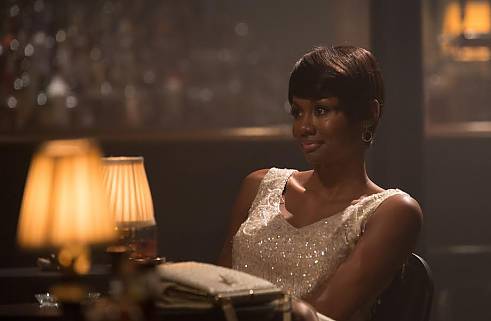 She is just very much a lady, she just carries herself like a lady. It’s beautiful to see. Even at her age now — she’s well into her 80s — she walks into a room, she expects things to be a particular way. I just love that about her. She has this energy and this life force about her that is really contagious and you can see why he would have been attracted to that and even would have tried to capture that and contain it and make it his own. You could see how that could happen.

I was so attracted to her courage and her strength, the courage to love him so deeply, but at the same time, the courage to save herself when she saw things going very, very, very wrong. She is the one still standing today with the story to tell.

As I learned about her, it just became, ‘Oh my gosh, I would love to do this.’ Strong women, strong women are what’s attractive to me.

SPOTLIGHT: In a way, these characters seem so much of their time. It’s hard to imagine a man now demanding a successful woman give up her career for him and feeling that it’s his right to do so.

EMAYATZY CORINEALDI: Exactly. I mean, really! Are you kidding me? And again, her courage, having the courage to do that, to say, ‘I love this man. I’m going to give my all and I’m going to do this.’ It took a lot, but I love the fact that here we are today in 2016 and we’re telling her story. This is what she went through. 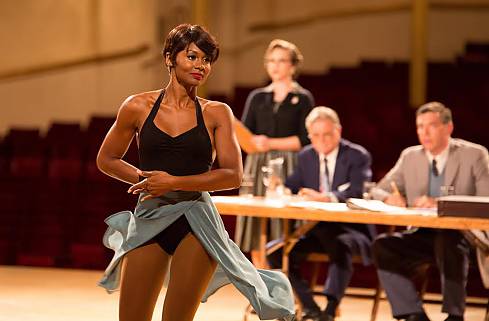 And now when you google her, there is going to be more information about her than there was before.

There really wasn’t enough. She had her own life before she met him — she was going places — and she played an integral role in his life and success.

SPOTLIGHT: So often a woman cast as the wife or lover of the great man is just that and is given little to do. But Frances is different. Don Cheadle calls her Miles’ muse and you can see that in the music he made clearly inspired by her and their relationship, but she remains her own person, pushing back when he tries to contain her

EMAYATZY CORINEALDI: The one-dimensional, everything just kind of flat, you have one event that happens to you, it’s just so boring, so suffocating. Everyone has some bit of strength to them, you can just see the different degrees of it and that’s what I like. That’s what Frances has and I love that about the script that Don wrote. He made sure that it showed all of Frances’ dimensions and that it was true to who she was.

I was very humbled, for her to be at that New York Film Festival premiere, sitting behind me and then afterwards we talked and she said, ‘I love the dignity that you portrayed.’ That’s everything, because that’s truth.

Why we chose Emayatzy Corinealdi: 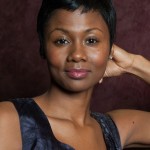 Corinealdi became someone to watch with her role Middle of Nowhere as a woman caught between her loyalty to an incarcerated husband and the opportunity for new love. Miles Ahead represents another breakthrough, something that seems only fitting as one fierce, determined woman plays another. We look forward to Corinealdi’s continuing ascent into the firmament of strong women on screen.