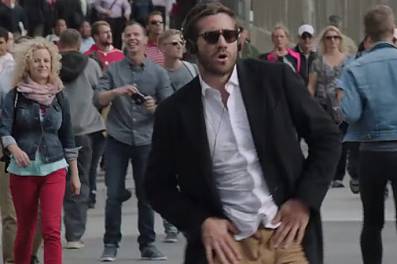 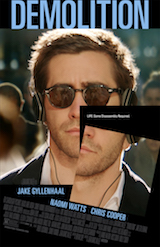 Opening April 8, AWFJ’s Movie of the Week is Demolition, which stars Jake Gyllenhaal (Prisoners, Nightcrawler) as an investment banker struggling to cope after the tragic death of his wife. Read on…

Critics are calling Gyllenhaal’s performances as Davis one of the best of his career, commanding in the role of an assured, confident man whose life is thrown into emotional and existential chaos after he loses his wife in a car accident. As he struggles to hold it together, he forms an unusual friendship with vending machine worker Karen (Naomi Watts) and her teenage son. Chris Cooper rounds out the cast as Davis’ father in law and boss, with whom he enjoys a close, if fractured, relationship.

Anne Brodie: Demolition is a work of art .. the story, the performances, direction and tone, it sets a new standard in film. Jake Gyllenhaal continues to spread his wings in his third film with an iconoclastic Quebecois director

Pam Grady: Jake Gyllenhaal adds to his growing gallery of intriguing and offbeat characters with his portrayal of an investment banker whose eccentric response to tragedy roils not just his life but the lives of those around him in Jean-Marc Vallee’s black-comic drama Demolition.

Jennifer Merin: Demolition bravely explores the psychology of loss and grieving with compassion and humor. Jake Gyllenhaal’s performance is superb!