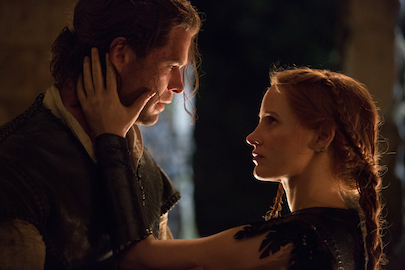 Opening April 22, AWFJ’s Movie of the Week is The Huntsman: Winter’s War, the lavish sequel to 2012 fantasy Snow White and the Huntsman. Charlize Theron returns as evil queen Ravenna, who is locked in a bitter war with her sister Freya (Emily Blunt). Chris Hemsworth also returns as The Huntsman, part of an army sworn to protect Freya, who falls for fellow hunter Sara (Jessica Chastain). Read on…

Sheila Roberts: My recommendation is The Huntsman: Winter’s War, the prequel to Snow White and the Huntsman, directed by Cedric Nicolas-Troyan. It features a terrific cast, strong story development, and complex female roles.