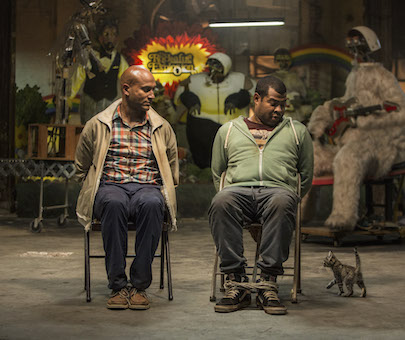 Opening April 29, AWFJ’s Movie of the Week is Keanu, the new comedy from director Peter Antencio (TV’s Key and Peele) about two friends who attempt to recover a stolen kitten by posing as drug dealers for a street gang. Written by Alex Rubens and Jordan Peele, the latter of whom also stars alongside Keegan Michael Key (the popular pair, of course, play Fargo’s hilarious FBI agent duo), the screenplay makes the most of the comedic talent of the naturally funny pair, along with their super-cute feline co-star. Read on…

A mix of slapstick and more restrained humour, Keanu is an easy, breezy start to this summer’s viewing schedule.

Anne Brodie: As it appeals to my silly side, I am keen to see Keanu, of course and how Fargo’s FBI agents, Peele and Key manage it.